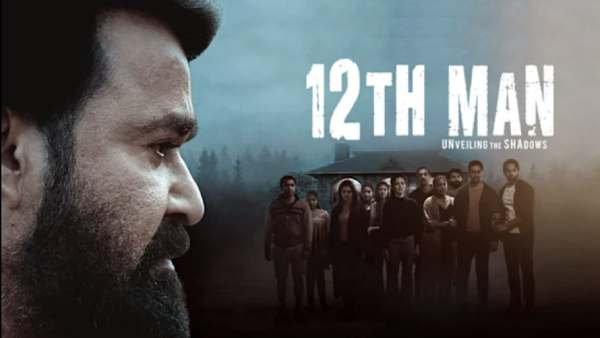 If there is one industry that revelled in its ability to quickly adapt to the pandemic and continued to churn out films like it was just another Friday, it is the Malayalam film industry. To facilitate this transition, which many other industries failed to make, Malayalam filmmakers started making tautly written chamber dramas. Not every such attempt worked, but almost every actor in Malayalam, star value notwithstanding, attempted to do at the very least one such film. Mohanlal and Jeethu Joseph did Drishyam 2, planned to do a Ram, and now, have delivered a 12th Man.

The chamber drama concept allows filmmakers to have multiple characters in the same setting for long periods of time, and fixing the film in the thriller or whodunit space allows the audience to remain a lot more engaged too. 12th Man is one such film with almost 12 principal characters and a few supporting ones finding themselves marooned in a resort trying to figure out who among them is a killer. What such films majorly require is strong writing, and that is where the blockbuster combo of Mohanlal and Jeethu show the first signs of fraying.

Written by KR Krishnakumar, 12th Man is also a commentary on friendships. Here are 7 “life-long” friends and their respective spouses who pride on their deep understanding and love for each other. All it takes for skeletons to tumble out of the closet is one spin on the traditional Truth or Dare game, which was recently seen in the 2016 Italian film, Perfect Strangers. While the game might seem as the harbinger of bad news for this close knit group of friends, it is clear that the problem lies in those aforementioned skeletons that kept on piling inside each of their closets. One fine day, at a resort in Idukki, the closet gives away, and one of them is murdered.

Mohanlal plays Chandrasekhar, an outsider of this group, who finds himself in the middle of the investigation out of sheer coincidence. While his investigation skills should be given due merit, his initial run-ins with the group as a inebriated fellow guest at the resort, don’t really do much to the film. In fact, the leisure of taking time to establish the 11 friends don’t really help apart from serving as red herrings, which never seem to end in this film. However, the casting is on point because the talent pool in this film is equally matched and experienced, and it doesn’t make us think if the “bigger” actor is the killer because they wouldn’t have agreed to be just “one of the suspects” in a multi-starrer.

Watching the events unfold, one can’t help but not think of Agatha Christie novels or even 12 Angry Men, where the power of persuasion and perception was best showcased. Here too, after the murder is committed, Chandrasekhar gathers the remaining 10 friends around a table, and goes on sifting through the lies of each of them before reaching the “a-ha” moment. There are multiple affairs that come out in the open. There are tears. There are doubts being cast on each other. There are sudden bouts of anger. But the biggest problem with 12th Man is none of these really make us empathise with the proceedings. After a point, we want to know the killer’s identity not to know who killed the friend, but just that we have already spent close to 160 minutes waiting for it to happen.

Verdict: With more focus, and braver choices at the editing table, this well-acted film fronted by Mohanlal would have been a more worthy addition to the Jeethu-Lalettan brand of films
Rating – 2.5 / 5