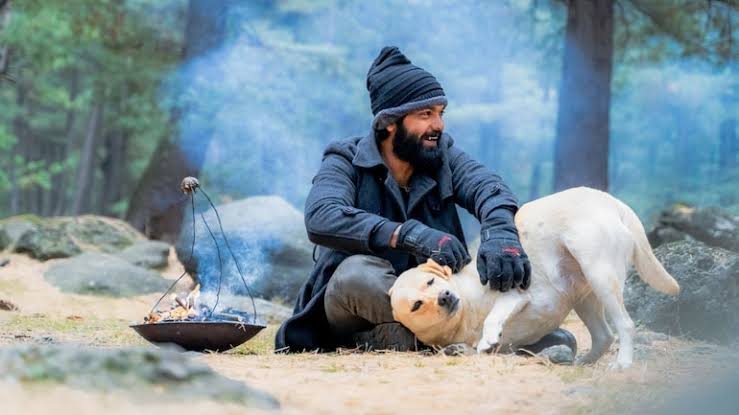 When it’s a movie about the ‘Canines’, there are more probabilities of finding a mixed response from the audiences. Let us say, it’s more like General audiences Vs Pet Lovers, and the results are either passable-or-extraordinary. In both cases, the films made under this genre and premise manage to win the appreciation of universal crowds. Regrettably, in recent times, it was quite devastating to see that many producers started making soulless dog-human relationship based movies merely for sake of a good market in other dubbed versions. However, Rakshit Shetty’s ‘777 Charlie’ stands out to be a distinct exception, where the intention of makers isn’t eyeing for gold at the box office, but to deliver a wholesome feel-good movie that spreads a positive and meaningful message.

As the trailer has already clearly indicated, 777 Charlie is about a man named Dharma (Rakshit Shetty), who is harmless but hated by everyone. He has a good heart, but his ‘I don’t give a damn’ attitude makes him look like an alien in his neighborhood. Only very few like the little girl can look deep into his soul rather than blindly being judgmental. But his life takes a turn, when Charlie, a Labrador has escaped from the clutches of his brutal owner and finds Dharma as a safe haven. The stubborn-hearted Dharma has no room for Charlie’s naughty tricks, but he can’t avoid it. Sooner, both become acquainted and embark on a journey together that becomes a life-changing moment for Dharma.

From getting a vivid inspiration from Richard Gere’s ‘Hachiko’ and having the faintest reflection of the final journey of Dharma (Pancha Pandavas after the Mahabharatha war) with a dog that travels beside them. In the final conversation at Gate of Heaven, where the divine deity doesn’t want to enter heaven without the dog that reveals the actual identity of the canine creature… 777 Charlie encapsulates all these inspirations together, and brings up a heart-warming tale that tickles your funny bones, leave some lumps in throats, brush your hearts with emotions, and send you back with a smile. Of course, there’s a good message imparted as well.

When it comes to performances, the show completely belongs to the Labrador, whose screen presence is amazing. Kiran Raj deserves special mention for his earnest belief in this project. This could have been yet another potboiler movie with cheating shots, a couple of emotional episodes, and winding up with tragic stuff. But the way, every single scene is crafted and materialized keeps striking our minds on the groundwork of this writer-director. Rakshit Shetty clearly understands the picture and very well underplays his role. Adding a couple of separate romantic sequences would have played a spoilsport, but Kiran and Rakshit together have made a strong decision to let the Labrador rule the show. The others including Raj B Shetty, Bobby Simha, and others have played their roles with complete justice.

Technically, the cinematographer needs special appreciation for treating the entire atmosphere with uttermost care. The background score by Noble is yet another embellishment to the tale.
The first half of 777 Charlie would definitely impress the pet lovers, but for general audiences, it might look like a slow start, but once, the adventurous portions show up, the emotions and exhilarations galore up. The climax has been done with a perfect motive, not to make the audiences, especially pet lovers walk out of theaters with touches of melancholy, but with eyes moistened with happy smiles.

On whole, 777 Charlie is a delightful movie to watch and it doesn’t disappoint you anywhere. A perfect treat for family audiences, especially kids, who have been urged by situations to watch gunshots, bombs, gory violence, and blood splashing all over screens for the past few months.

Verdict: An aplomb entertainer that lets you enjoy, emote, and walk out of theaters with satisfaction.