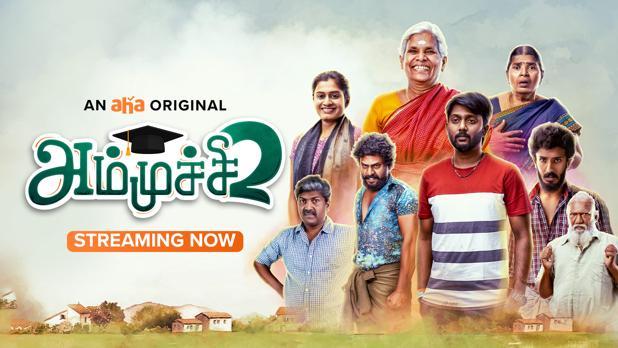 The first season of Ammuchi created by the famous YouTube channel Nakkalites turned witnessed a decent reception. And now, the franchise gets escalated as Aha Tamil has premiered its second season. So what’s Ammuchi Season 2 all about? Let us check out!!

Just as it happened in the first season, Arun is back to Kodangi Palayam, this time for another reason: To make sure that his ladylove Mithra manages to pursue her college education and fulfill her dreams. However, Arun and Kondangi Palayam have never been a good combo, and as usual, he encounters the hilarious turbulences in the little village with the same characters from the first season being a part of this drama.

Ammuchi Season 2 has eight episodes, each with an approximate running length of 25 minutes. Well, if you are familiar with the Nakkalites YouTube Channel and have already watched Ammuchi Season One, you’ll instantly adapt to the new season and enjoy its fun, or else, it might take some time for your interests to brew up.

The plot is very simple, and the team doesn’t try to bring up anything exceptional. They have clearly understood that ‘Humour’ is the core soul of their drama, and try to score their best in this domain. The one-liners, especially when it comes with the native Coimbatore slang, there’s so much to enjoy. The actors have done decent performances, except for the actor essaying the heroine’s father’s role and a few actors, exceeding the limits required, thereby delivering the artificial result.

The humor portions are good in the first 4-5 episodes, and it does get extra mileage in the latter part as well. However, we slightly feel like scenes are stretched out in a few places during the 6, 7 & 8 episodes. However, by the end of the show, the message conveyed about women’s education eclipses those little drawbacks.

Technically, the shot compositions by cinematographer Santhosh Kumar and Kannan Balu’s editing works are appreciable. To be precise, both these departments showcase an upgraded work than the first season. The writing too is appreciable, where it doesn’t attempt to exceed its limitation and attempt something superficial. Vivek’s music doesn’t have a greater impact on this comedy-drama, but it’s passable.

Overall, Ammuchi Season 2 is a delightful entertainer. Maybe, for the ones, who are directly opting for this without watching Season 1, might feel a little odd, but it wouldn’t disappoint them for the premise has a good message at the end and is conveyed hilariously.

Verdict: A simple plot narrated with hilarious ingredients with a good message at the end makes Ammuchi Season 2 watchable