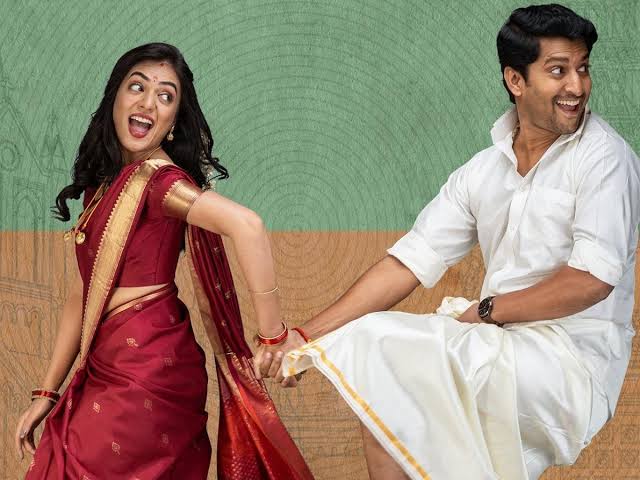 Filmmaker Vivek Athreya’s latest outing ‘Ante Sundaraniki’ featuring Nani and Nazriya Nazim in the lead roles is released today. We at Full on Cinema bring you the exclusive analysis of this movie.

*Story*
Sundar (Nani) and Leela Thomas (Nazriya Nazim) have been childhood friends and fell in love during their teens. Regrettably, Sundar is a boy born into an orthodox Brahmin family, and Leela Thomas, a Christian becomes a major constraint that puts their relationship at stake. Unable to face their parents, they hatch a smart conniving plan that unexpectedly starts to backfire.

*Synopsis* – Few minutes into the movie, you will have a 100% clear prediction that there’s nothing new in this tale and this is yet another romantic potboilers that we have watched zillion times. Of course, the story travels in a predictable till the last 30 minutes, where you’ll be toasted with some surprises.

*Screenplay* – The first half brims with entertaining moments, but doesn’t step into the actual conflict. The way, director Vivek tries to narrate it in a non-linear way blending the screenplay with humor keeps us engrossed. As the story moves into the post-intermission phase, we are endowed with non-stop laughter that encapsulates both slapstick and dialogue-based humour. To a certain extent, we start feeling that the movie getting overstretched, but still, the humorous quotients and the well-executed emotions through every single character eclipse those little minuses. Although the friendship between the lead characters has been very well depicted, the reason the girl falls for him isn’t properly conveyed. She breaks up with a long-term relationship, and in the next few days, we see a new relationship happening. But before we are struck by these logical factors, the heavy dose of humor and entertainment doesn’t let us into rational thinking.

*Performances* – Of course, the Natural star is always far-famed for delivering stellar performances effortlessly. If 50% of the engaging factors are delivered through the screenwriting, the other 50% is contributed by his wonderful expressions and performances. He carries major portions of this movie upon his shoulders. Nazriya Nazim is a delight to watch for. She has chosen a perfect comeback. Very rarely do we come across a scenario where the performer and characterization complement each other. Nazriya and Leela is one such ample evidence of it. Naresh and Rohini as Nani’s parents have exerted an impeccable performance. Azhagam Perumal and Nathiya befittingly look perfect for their respective roles. Anupama Parameswaran is a special surprise in this movie. Her characterization faintly reminiscences of Nithya Menon’s role in Geetha Govindam…

*Technical aspects* – The cinematography and Art Department are the ultimate showstoppers. The visual magic works a lot of enhancement to the narration of Vivek. The songs don’t remain in our memories post the show, but the BGM is appreciable.

On the whole, Ante Sundaraniki is an appreciable time-pass entertainer. It’s a kind of movie that demands you to pick up your favourite package of food and beverages, sit back, sprawl out, and spend the next 150 minutes of a feel-good experience.