The magnificent fete, the AVM’s Masterclass 2022 was inaugurated by the august presence of honorable dignitaries amidst the presence of 10+ colleges.

The day began with the Thamizh Thaai Vaazhthu and lighting of kuththu vilakku, seeking the blessings of the almighty. Our audience were welcomed by the college Principal, Dr. N. Bhuma follwed by the Presidential Address by Secretary and Correspondent Mr. AVM K Shanmugam. The felicitation and honoring ceremony of the national award winners commenced with Mr AVM K Shanmugam felicitating Actor, Director Mr. Radhakrishnan Parthiban, who has won the National Award for Oththa Seruppu Size 7. Mr. Parthiban motivated the gathering through his life experiences and offered an opportunity to be his associate for 4 students. 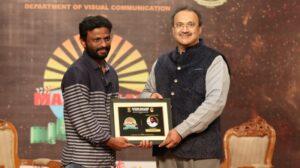 Following his articulation, was the felicitation of Kalaimaamani D. Imman, for winning National Award for his foot tapping beats and heart warming tunes in Ajith starrer Viswasam. He invoked the students about perseverance and hardwork. The most prolific producer, Thiru. Kalaipuli S Thanu, was also felicitated for the National award in the best film category for Asuran. He reminisced his unfolding days and his special bond with the AVM Legacy.

The inaugural ceremony became more bright, with the presence of our special invitees Mr. Ravi Kottarakkara, Secretary SIFCC, articulated the audience about how to evolve a film from it’s embryo stage. Following him was Mr. Kaatragadda Prasad, President SIFCC, he threw in light about how to make budget films. Mr. VM Muralidharan, COO of Bahawan Cybertek and the former chairman, Ethiraj Group of Institutions addressed the audience about technology development and how it has affected media and cinema. The occasion was also graced by Mr. AMV Prabhakar Raja, MLA, Virugambakkam Constituency and Mr. Thangaraj, General Secretary of the Indo Cine Appreciation Foundation. 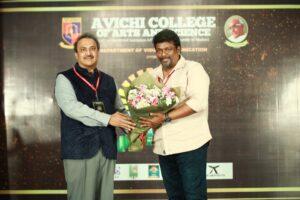 The day continued with the session with Director Pandiraj, who enlightened the audience about reality filmmaking. The audience attended the session of Mr. Anup Chandrasekaran, gaining cognizance about the Television Industry. The above mentioned sessions were moderated by Indian Journalist, Actor, Mr. Chithra Lakshmanan. The day concluded with the audience attending the masterclass by the dauntless wildlife filmmaker, Mr. Subbiah Nallamuthu. The audience were screened the National Award Winning Documentary, Machli – The World’s Most Famous Tiger. The floor was open for questions and the audience made utmost use of it. Mr. Subbiah also presented few exclusive clips during his filming.