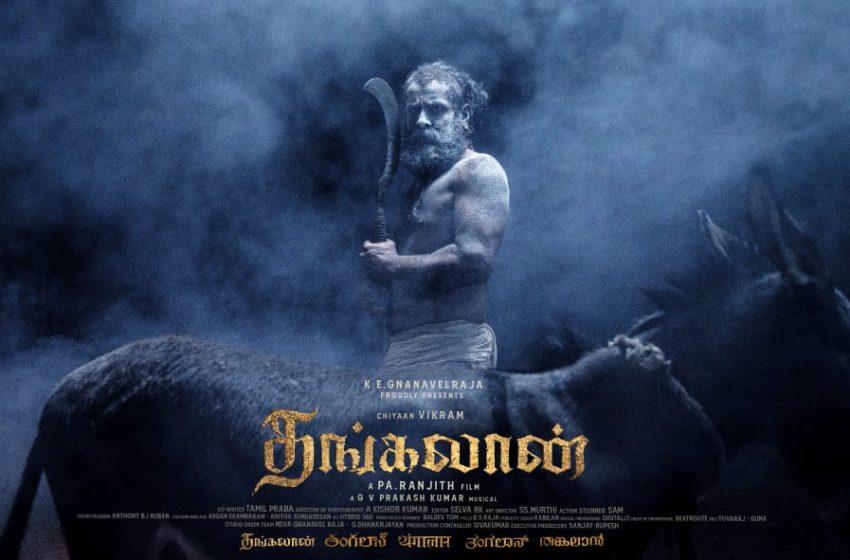 Chiyaan Vikram’s new project has been titled “Thangalaan”. This film, directed by Pa. Ranjith has now got its title announcement poster revealed now.

The film directed by eminent filmmaker Pa Ranjith has been titled Thangalaan. CHIYAAN VIKRAM plays the content-driven hero in this movie that features Parvathy and Malavika Mohanan in the female lead characters. The others in the star-cast include include pasupathy, Hari Krishnan, Anbu Durai and few more prominent actors.

A. Kishore is handling the cinematography and GV Prakash Kumar is composing music. Tamizh Prabha is the co-writer of this film and art department is handled by S.S. Moorthy. R.K. Selva (Editing) and Stunner Sam (Stunts) are the others in star cast.

The story set against the backdrops of Kolar Gold Field, the film crafted and materialized as an action entertainer is produced by eminent Studio Green K.E. Gnanavel Raja in association with Pa. Ranjith’s Neelam Productions at a whopping budget.

Chiyaan Vikram’s upcoming film tentatively titled ‘Chiyaan 61’ has been named as “Thangalaan”. The title announcement poster unveiled for the auspicious occasion of Diwali Eve has turned to be a colossal festive treat for the Chiyaan fans