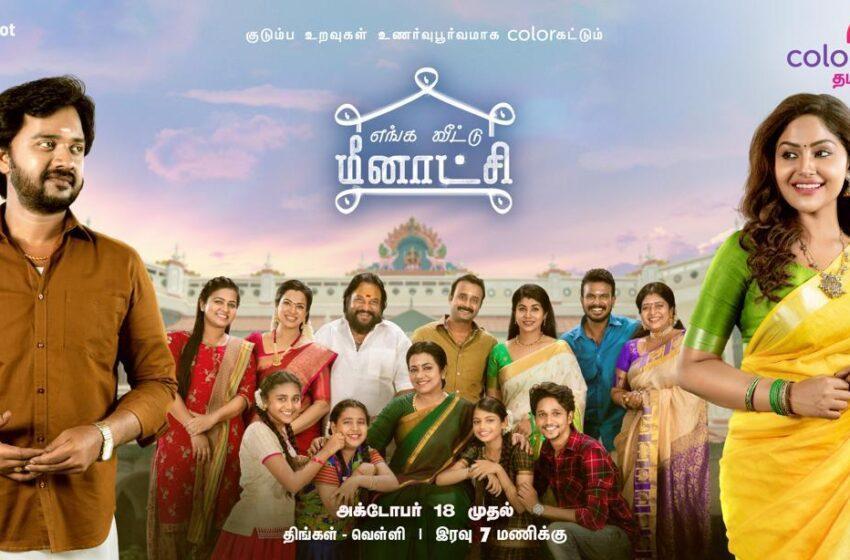 *Dance Vs Dance Season 2 featuring actor Kushboo and renowned choreographer Brinda Master, will be aired every Saturday and Sunday at 7:30 PM
*Enga Veetu Meenakshi that hit the screens every Monday to Friday at 7:00 PM
Chennai, 12th October 2021: Colors Tamil, Viacom-18’s fastest-growing channel in the Tamil GEC space, unveiled two new prime-time shows, Dance Vs Dance Season 2 and Enga Veetu Meenakshi. As part of newly launched brand campaign, ‘Ini Dinam Dinam ColorKattum’, the channel aims to showcase tales that celebrate women and their families through high-impact, contemporary shows.
Kick-starting the new line-up, Colors Tamil’s flagship dance reality show – Dance vs Dance Season 2 will premiere on 17th October with a grand launch episode at 6:00 PM, followed by competitive rounds every Saturday and Sunday at 7.30 pm starting from 23rd October. Adding to this new line-up, the channel also announced the launch of its new fiction show – Enga Veetu Meenakshi, directed by Ramkumar, with Actor Poornima Bhagyaraj, Actor Jeeva and Actor Shritha Sivadas in the lead. The tale set in the backdrop of Karaikudi will premiere on 18th October 2021 at 7:00 PM and will be telecast from Monday to Friday.

Commenting on the occasion, Colors Tamil’s new business head, Mr Rajaraman, said: “True to our ideology of ColorKattum, Colors Tamil aspires to entertain families with novel plotlines, engaging characters and a fresh format altogether. The channel has always been keen to break stereotypes and showcase progressive themes that serve as an inspiration to audiences, especially by highlighting different facets of women.”

Adding to this, “We have a stellar star cast in actor Kushboo and choreographer Brinda Master for Dance Vs Dance while Jeeva, Shritha Sivadas and Poornima Bhagyaraj lead the Enga Veetu Meenakshi brigade. We believe that a change in the prime-time format and the launch of these two shows will begin a new and exciting journey for the channel”, said Mr Rajaraman

The first season of Dance Vs. Dance was a huge hit among the masses. The second season has the charming Actor Kushboo and renowned Choreographer Brinda Master in the judges’ panel. The show also boasts of four team owners- Actor Shaam, Choreographer Sridhar, Actress Ineya, and Abhirami Venkatachalam who will be seen heading different teams. With supremely talented dancers partaking in the show from across the country, the show is all set to create new benchmarks in the dance reality space.

Talking about the show, Actor Kushboo said, “It is a great pleasure to have been associated with Colors Tamil as the channel has been setting new benchmarks in the Tamil GEC with its innovative line-up of shows. Dance vs Dance Season 1 was a mega hit and I am confident that the second season is also going to be a success.”

Renowned Choreographer Brinda said, “Having been a part of the success of Dance vs Dance Season 1, I am positive that the second season will take dance reality shows in the Tamil GEC to the next level. The new talent on the show is truly promising.”

The new show Enga Veetu Meenakshi revolves around the life of a lecturer Meenakshi and Chidambaram a 35-year-old wedding planner. The plot traverses around the beautifully woven relationship of Meenakshi and Chidambaram as they set out on a quest to unite their families. The fiction show features a larger-than-life star cast with Shritha Sivadas (Meenakshi) and Jeeva (Chidambaram) in the lead roles along with Poornima Bhagyaraj (Valliamma), Aadukalam Naren (Devanayagam), Raj Kapoor (Meiappan), Bava Lakshmanan (Nalapagam Nagaraj), and Gnanasambandam (Principal) in supporting characters.
Commenting on the launch of the new fiction show, Director Ramkumar Doss said, “We are extremely thrilled to launch Enga Veetu Meenakshi. Unlike other fiction shows, it has a unique storyline that focuses on the idea that women are the harbingers of prosperity among families and the fact that they can achieve anything once they set their minds to do so.”
Commenting on the occasion, Actor Poornima Bhagyaraj said, “I am happy and delighted to be part of Enga Veetu Meenakshi, which has a very distinctive narrative with well-defined characters. Each character in the show has a pivotal role to play. I really liked the way my character has been portrayed and I can tell you that is indeed profound.”
Further, the channel strengthens its prime-time content by rejuvenating its line-up of shows with Amman Season 2 at 6 PM, Enga Veetu Meenakshi at 7 PM, Idhayathai Thirudathey Season 2 at 8 PM, Abhi Tailor at 9 PM and Sillunu Our Kadhal at 10 PM, Prime Time is going to be even more power-packed with a dramatic mix of new storylines and introduction of a host of interesting characters from 18th October. Adding to this, the channel will also premiere an interesting array of movies during weekdays at 1.30 pm.

Don’t miss any of these exciting shows on Colors Tamil, which is available on all leading cable networks and DTH platforms – Sun Direct (CH NO 128), Tata Sky (CHN NO1515), Airtel (CHN NO 763), Dish TV (CHN NO 1808) and Videocon D2H (CHN NO 553). Viewers can also tune in to VOOT any time to see them at their convenience.