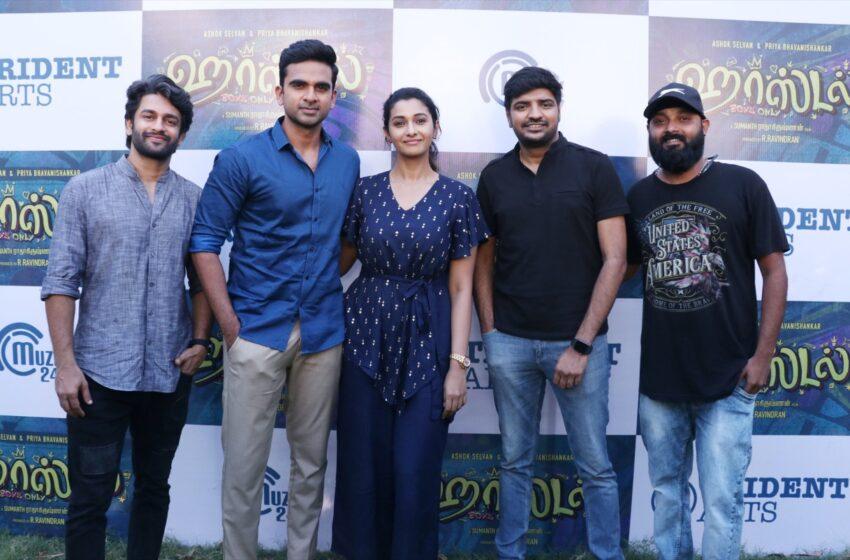 Actor Ashok Selvan and actress Priya Bhavani Shankar are playing the lead roles in the movie ‘Hostel’. The movie directed by Sumanth and produced by R Ravindran of Trident Arts is a remake of Malayalam Hit movie ‘Adi Kapyare Kootamani’. With the movie hitting screens on April 28, 2022, the entire cast and crew were present for the pre-release event to interact with the press and media fraternity.

Speaking on the occasion, actor Ashok Selvan started his speech thanking the media and press friends for being supportive to all his movies. He picked up one of the lines from actor Ravi Mariah’s speech saying, “Comedy is a serious business. So please encourage our efforts in Hostel (His request was not towards media, but the general audiences as the crew felt that audiences are taking ‘comedy’ genre casually without knowing that tickling funny bones is the toughest task). I thank my producer Ravindran for making this project happen. Initially, I didn’t want to be a part of remake project, but then, when Sumanth narrated me the script, it was just an adaptation of the original version, and he has completely changed the script. Priya Bhavani Shankar has been proving to be a sensible actress, and her choice of movies is great. I thank Sathish for being a part of this film. I am happy to see his growth as a lead actor, and wish him all the best. Hostel is getting released on April 28. I request everyone to support this movie.”

Actress Priya Bhavani Shankar said, “I thank producer Ravindran for making the entire process of this movie smoother. Cinematographer Praveen has done a fabulous work. There were many times, where I admired looking at myself during the dubbing process. Ashok Selvan’s hard work has started paying him good results now. I am glad to see Sathish exploring his potential as lead character in many movies. Hostel will be a fun-filled entertainer, and will surely impress all.”

Actor Sathish also thanked the media channels, who have responsible for his enormous growth in the media industry. Ravi Mariah, actors KPY Yogi, Krrish, and others were present for the occasion along with director Sumanth, cinematographer Praveen and others.