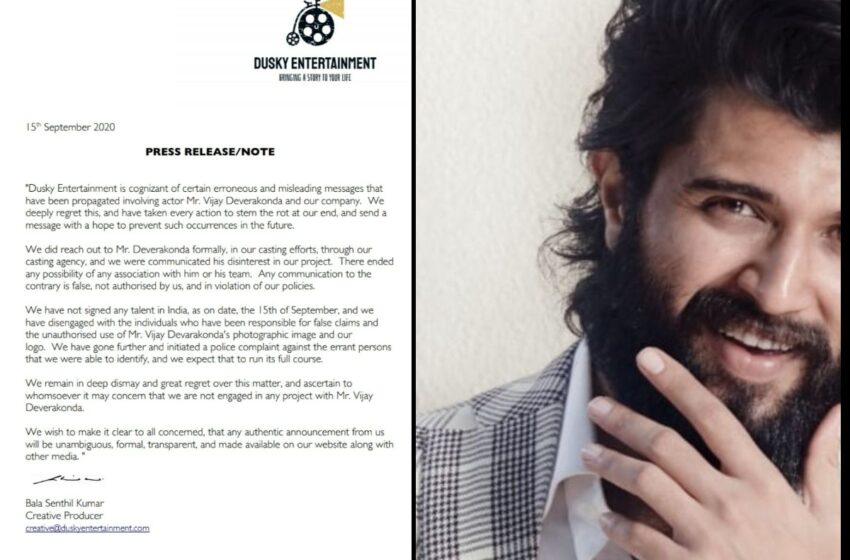 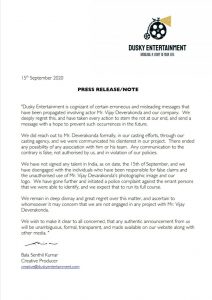 Bala Senthil Kumar creative producer from Dusky Entertainment has issued a press release on the latest issue involving actor Vijay Deverakonda stating they did reach out to the actor but later he communicated back to the production house his disinterest in the project .

below is the press release from the production house

“Dusky Entertainment is cognizant of certain erroneous and misleading messages that have been propagated involving actor Mr. Vijay Deverakonda and our company.  We deeply regret this, and have taken every action to stem the rot at our end, and send a message with a hope to prevent such occurrences in the future.

We did reach out to Mr. Deverakonda formally, in our casting efforts, through our casting agency, and we were communicated his disinterest in our project.  There ended any possibility of any association with him or his team.  Any communication to the contrary is false, not authorized by us, and in violation of our policies.

We have not signed any talent in India, as on date, the 15th of September, and we have disengaged with the individuals who have been responsible for false claims and the unauthorized use of Mr. Vijay Devarakonda’s photographic image and our logo.  We have gone further and initiated a police complaint against the errant persons that we were able to identify, and we expect that to run its full course.

We remain in deep dismay and great regret over this matter, and ascertain to whomsoever it may concern that we are not engaged in any project with Mr. Vijay Deverakonda.

We wish to make it clear to all concerned, that any authentic announcement from us will be unambiguous, formal, transparent, and made available on our website along with other media.