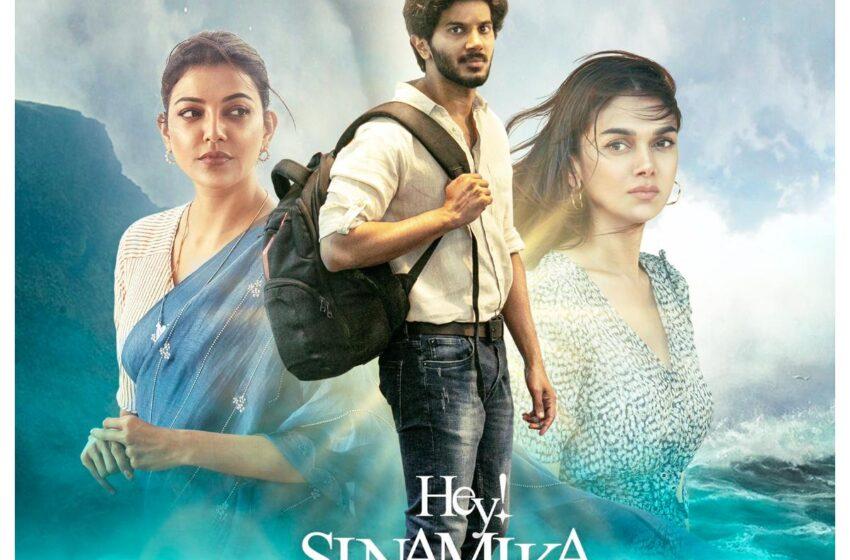 Dulquer Salmaan’s Hey Sinamika is an adaptation of an Argentinian movie that marks the directorial debut of choreographer Brindha. The film has a screenplay written by lyricist Madhan Karky. Kajal Aggarwal and Aditi Rao Hydari are playing the female lead roles. Govind Vasantha of ‘96’ fame is composing music and Preetha is the cinematographer.

The story opens with Yaazhan (Dulquer Salmaan) and Mouna (Aditi Rao Hydari) falling in love with each other at the first glimpse in a coffee shop. The story takes a fast-forward to two years later, where Mouna is irked by the clinginess of her husband. She gets the aid of her neighbor psychological Malarvizhi (Kajal Aggarwal) to get them split. However, things don’t go as planned as Malarvizhi gets emotionally attached to Yaazhan’s nature, which is hated by Mouna.

Love stories that deal with women’s emotions have always been complicated. In fact, the stories of Unnale Unnale, Vinnaithaandi Varuvaaya, etc. These movies had the main female lead characters rejecting their boyfriend and walking out of the relationship for no solid reason, but still, the audiences love these roles. Hey Sinamika is supposed to be one such film that gets hampered by poor writing, and the basic plot itself has flaws. The film is an adaptation of an Argentinian movie, which was earlier remade in the Korean language as well. With some role reversals in the plot (Which indeed is the main flaw), the story fails to impress us thoroughly.

The basic problem with Hey Sinamika is the running length that looks too stretched out. What should have been a 90-100 minute romantic drama runs into a long drama. In fact, the first look lacks proximity to the core subject, and it’s only 20 minutes after intermission, we are introduced to the premise. This is where the film scatters our attention. The characterizations played by Dulquer, Aditi, and Kajal Aggarwal can be appreciated. They have done a flawless job. However, Aditi looks slightly vague and directionless throughout the movie. The musical score by Govind Vasantha is just average. Except for the ‘Yaarisaikka’ song, other tracks look mediocre. Cinematographer Preetha has done a decent job with her cinematography. Director Brindha could have fine-tuned the script with refined writing, which would have resulted in good output. It works out well in the humour zone but fails to let us feel the emotions through the hearts and eyes of the lead characters.

Verdict: Hey Sinamika has a good dose of humour, but the inadequacy of emotions make it an average fare