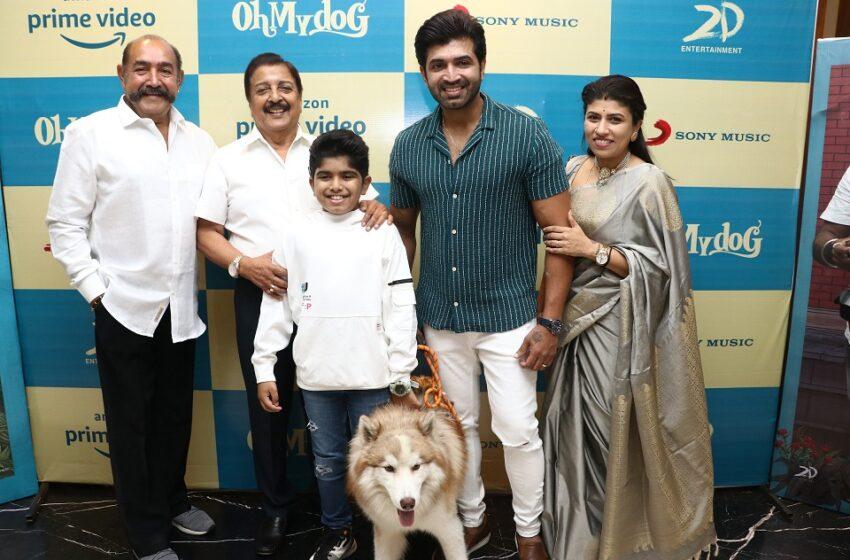 Suriya and Jyotika together are producing a full-fledged family entertainer ‘Oh My Dog’ for their prestigious banner of 2D Entertainment. The movie is scheduled for direct OTT premiere on April 21, 2022. During this juncture, the entire cast and crew were present for interaction with press and media fraternity. 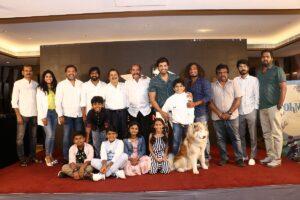 Actor Sivakumar, who was present among the special invitees said, “I have already seen the movie, and it has come out really well. I would compare this movie with the league of Kids-centric Hollywood movie produced by Walt Disney. It’s really a honour to be here for a movie that brings three generation of actors (Vijay Kumar-Arun Vijay-Arnav) together. It earlier happened with Nageswara Rao, Nagarjuna and Naga Chaitanya. It’s gladdening to see the history repeat here. I am elated that Suriya is producing such great movies. Jai Bheem has become the pinnacle of his successful career. I have seen Suriya grow up as a silent, polite boy, who would always hide from his teachers in the classroom to escape the questionnaires. I still remember the moment, where the management at Holy Angels school told myself and my wife to admit him in some other school due to his poor academic. Later, we admitted him in Bede’s school, and then at Loyola College. The principal asked me not to waste this seat as the sons of many leading actors and film fraternity discontinued their studies. However, I assured that he would do his best. With Suriya’s arrears getting increased with every semester. I expressed my anger and told him to complete the studies perfectly, and he managed to do it so. He was really upset with the response from one of the audiences at Kasi Theater after watching his debut movie ‘Nerukku Ner’. He has been a man of few words, and would hardly speak 4-5 words maximum with us in the home. But today, to see him carve a niche of excellence is a tremendous surprise. I never thought Suriya would scale glorious heights, and everything now looks like a dream. With Jai Bheem, he has touched the peak of success as a promising actor, where many changes in the reality after the film’s release in favour of the tribal community in Tamil Nadu. I wish the entire team of Oh My Dog for the grand success, and it is going to be a 100% satisfactory family entertainer.” 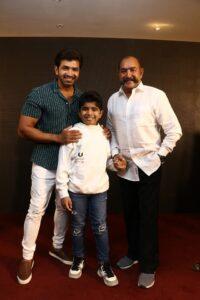 Actor Arun Vijay said, “This project is so special and close to my heart. More than sharing the screen with me, I felt that Arnav getting an opportunity to work with his grandpa is more like a blessing. I didn’t want to miss this opportunity, and hence agreed to go ahead with this project. I think Suriya and Jyotika for making this project happen. Arnav is a great pet lover. It isn’t just for dogs, but he is so fond of every animal, he comes across. It has reflected very well through his characterization, and so happens to be his naughtiness, which is very much present in his role for this movie.”

Actor Arnav said, “It is a great blessing to be working with Appa and Grandpa together. I thank Jyotika mam and Suriya uncle for giving me an opportunity to be a part of this project. Sourav uncle has given a great chance in this movie. Everyone who worked with me in this movie have been so friendly on the sets. I request everyone to support this movie.”

Actor Arun Vijay, Actor Vijaykumar, Actor Arnav, and many others from the team were present for the occasion to share their experience of working in this movie.

Sarov Shanmugham has written and directed this movie that features Master Arnav and a Siberian husky dog in the lead role.