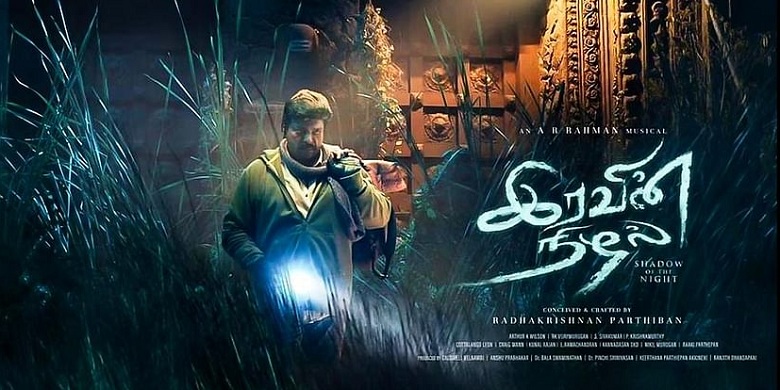 Good and evil are within you. The more you and the world around feed them, it flourishes to let you live or succumb. Nothing is fate except, everything is pre-written and that’s called Karma. Filmmaker-actor Parthiban, whose cult and craftsmanship in telling unique stories with out of a box approach has earned him a genuine stature in the movie industry. Precisely, his filmography as a filmmaker inclines to a couple of classifications, the ones that connect very well with audiences like Oththa Seruppu, Houseful, and many in the league and the rest like Kudaikkul Malai, where his attempts were appreciated, but somewhere, audiences felt them too outlandish. In both cases, the creator remains a genius, but the perceptions do matter when it comes to a movie, especially, when made by a wizard-like him.

The story traverses through back and forth of a 50-yr old Nandu (played by Radhakrishnan Parthiban), whose life has been never tired of negativities and deplorable conditions. The movie opens with a scenario, where he has to combat a mortal being, who is indeed in search of him to settle the scores. Meanwhile, Nandu sets out to revisit his past life, where we see his various avatars from different stages of his life appearing. As the movie opens, Radhakrishnan Partihban takes very few minutes to take us into the premise. We get a clear picture of the character with the establishment of his young version characters – 10s, the 20s, 30s & 50s. It is evident that a man with so much darkness and venom spit by everyone, he encountered throughout his life, cannot manage to redeem himself, but instead, get succumbed. The actors have very well etched these essences with their good performances.

Brigada has expressive eyes, and it is evident that she craves to perform challenging roles. There is one particular scene, where the 30yr old Nandu rescues her from a financier, and those 3 minutes of performance she gives with a smiling face followed by a gruesome act stand out to be an outstanding work. Parthiban is a spontaneous actor as everyone knows, but he manages to impress us effortlessly in the hilarious scenes alone. There is one particular scene, where his dialogues are merely through a Point of View shot, and he leaves us in splits, tickling our wits. Audiences have always expected this stroke from Parthiban, and it would be great if he would come up with a full-length movie with a hilarious genre and performance. The other actors have delivered great work in this movie. The hard work of these performers, we see in the making leaves us awe-stricken. Of course, the drama artistes have done this a zillion times for stage plays, where there is no option called ‘Another Take’, but still, this one is worthy of appreciation. Cinematographer Arthur Wilson is the absolute showstopper in this movie. His entire team deserves complete applause for making ‘Iravin Nizhal’ get materialized. Yes, we see some objects used as the ‘Transition Element’, where the camera keeps panning and tilting from one to the other. For a few audiences, this might create intense tension and pressure on their eyes. This might not be noted blatantly, but such factors do play a major role in audience psychology. Yes, it’s the world’s first-ever Non-Linear movie shot in Single Shot.

When you have a great story to tell, especially from an icon, who can spark off amusements, emotions, and humour with his dialogues alone, Iravin Nizhal could have been made as a normal movie. This is merely a suggestion, but not a point in the column of flaws. But still, we have come across few movies, where directors fail to convey the narrative properly due to their focus on grandeur and technical aspects. Over here, there are a few technical blunders, yet acceptable due to the first-of-its-kind attempt. In Iravin Nizhal, the major conflict, or what one might say as flip side is the contest between screenwriter Parthiban and technician Parthiban. Both are good if they were in two different movies, but then their amalgamation restricts our focus on the movie in a few places. Especially, we do miss the importance of other technical aspects as our eyes and minds keep juggling between the performances and camera works, which includes AR Rahman’s BGM and songs as well. His score for the opening title credits is magical, but eventually, we lose the focus on the musical part due to the other priorities.

Overall, It’s a genuine and honest attempt by the entire team, and hence Iravin Nizhal deserves a watch.

Verdict: Technically Outstanding, but narratively could have been better
Rating: 3.5/5
Review By – Magesh