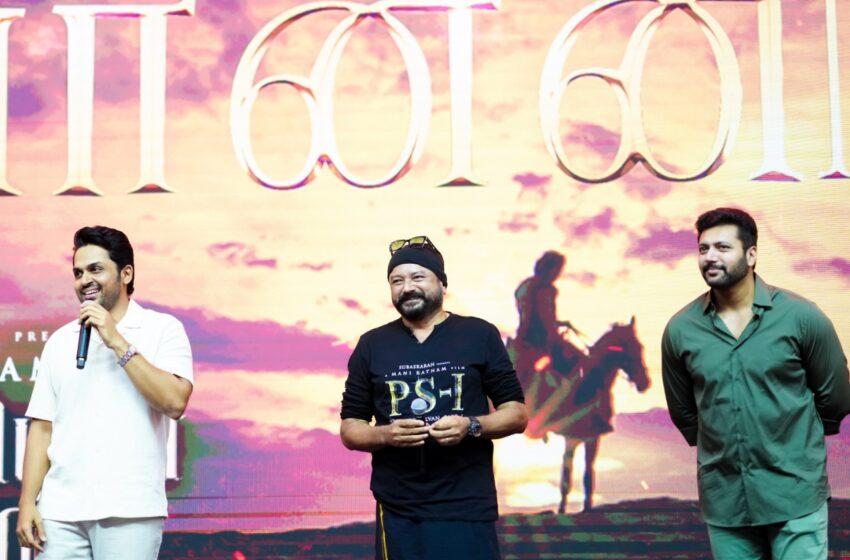 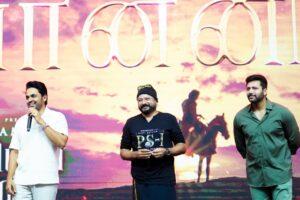 The much-awaited first single from Mani Ratnam’s Ponniyin Selvan, was launched at a mall in Chennai. Titled Ponni Nadhi, the song is written by debut lyricist Ilango Krishnan, and is sung and composed by AR Rahman. The event was graced by actors Karthi, Jayam Ravi, and Jayaram.

Jayaram, who plays Azhvarkadiyan in the duology, thanked the makers Lyca Productions and Mani Ratnam for giving him such an important part in an important film. “Ponniyin Selvan is a screenplay that many Tamilians know by heart. They have a vision for how each character must be like, and act. So it comes with never-before-seen expectations. I hope Ponniyin Selvan and Azhvarkkadiyan leave a lasting impression in your hearts,” said Jayaram, who also talked about the gruelling shooting schedules, and how he put on weight for the role even as Karthi and Ravi would slog it out at the gym every single day.

Karthi reiterated how Ponniyin Selvan is a film close to all their hearts, and reminisced the time he spent with Ravi and Jayaram on the sets. “I have been fortunate to have worked with Jayaram sir. He is a brilliant actor, and is leagues ahead of someone like me. To get into the role of Azhvaarkadiyar, there is something he has done that is awe-inspiring,” said Karthi, on whom the first song Ponni Nadhi has been picturised. Drawing parallels to the river and the film, the Kaithi actor said, “Ponniyin Selvan has been an unattainable dream project for years together now. Even when we started it, we faced one setback after another. But just like how a river knows its way to the sea, Mani sir knew how to complete this project. We went on this journey with him, and he completed PS1 and 2 in just 120 days.” 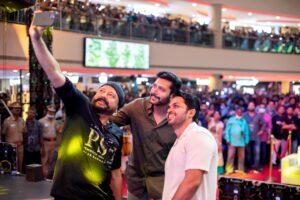 Crediting the technical team for their efforts, Karthi spoke about how the makeup started at 2.30 am, and that meant the makeup artists had to be ready even before. “I don’t think any of us had a lot of sleep during the shoot. Working in PS was like a dream, and credits to Lyca’s Subaskaran for backing that dream. He is an interesting person, who not only wants to take Tamil cinema to the next level, but walks the talk by pooling in the resources. In fact, I want to watch Ponniyin Selvan along with him. This film is his dream also.”

Talking more about the song, Karthi added, “Listening to the lyrics of Ilango Krishnan, I was transported to the Chola era. It has come out really well, and it is magical.”

It is this magic that Jayam Ravi feels will resonate with the audience who would enjoy every single frame that is seen onscreen. Ravi spoke about how during the filming, the actors were in constant apprehension about the audience’s response, and their cheers at the event gave them their answers. “Karthi, AR Rahman, Ravivarman, Brindha Master haver all collaborated to give us this song. With such names involved, success is the only outcome,” said Ravi. 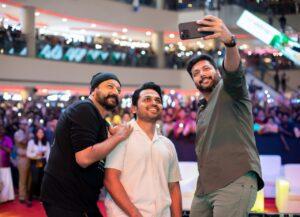 A common commentary by all the three actors was the kind of efforts they have put in to bring to life the vision of Mani Ratnam’s adaptation of Kalki’s beloved work. “I am afraid of horses, and it was Karthi who pushed me to get over it, and train together for horse riding. It is rare to get a friend like him. In fact, there are a lot of onscreen heroes in the film, including Vikram, Sarathkumar, and Vikram Prabhu, but off screen, the biggest hero of them all was Mani Ratnam sir,” said Ravi, who spoke about the contributions of other heroes like DoP Ravi Varman, production designer Thota Tharani, and most importantly, producer Subaskaran of Lyca Productions. “Then, now, and forever, our hero will always be AR Rahman sir, and it is my honour that I got to work with him for the first time in a film like Ponniyin Selvan. It is a dream come true.”

This film also marks Ravi’s reunion with Jayaram, and the former spoke fondly about the veteran. Ravi went on to shower praises on the superior technical prowess of the team, and how each and every scene was made thinking about the audience, and respecting their vision and expectation from Ponniyin Selvan.

Each of these actors promised to speak more about the film in the trailer launch event that is expected to happen soon. The first part of the duology, written by Mani Ratnam and Elango Kumaravel, is gearing up for a September 30 release. Starring an ensemble cast, which includes names like Aishwarya Rai Bachchan, Trisha, Parthiban, Sobhita Dhulipala and Aishwarya Lekshmi, Ponniyin Selvan 1 will be out in Tamil, Telugu, Kannada, Malayalam, and Hindi.