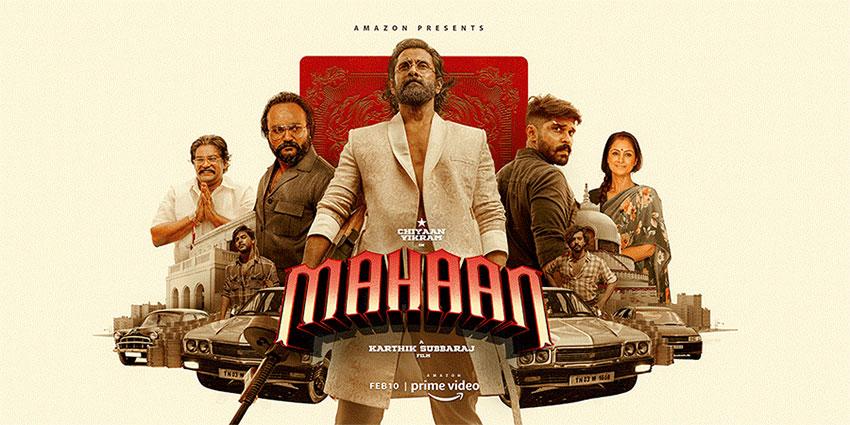 Filmmaker Karthik Subbaraj’s directorial nuances involving top-notch making style along with commercially engaging narration has kept him in the good pages of A-league actors. Well, he is one among the rarest moviemakers in K-Town to have consistently worked with big names like Rajinikanth, Dhanush, and now Vikram. With ‘Mahaan’, everything from Day 1 has kept the audiences glued to the project. Courtesy of the father-son Vikram-Dhruv duo sharing the screen space for this made the Chiyaan fans go gaga over it. So, does Mahaan that is streaming on Amazon Prime Video meet or exceed our expectations.

Born in the lineage of freedom fighters Gandhi Mahaan (Vikram) has been raised with so much discipline, where his wife and in-laws kept him under check. According to his wife (Simran), watching a movie itself is a sin, and their son Dadha refrains himself from watching the movie posters themselves. Bounded by chains, Mahaan gets an opportunity to break the chain and live his life of dreams on his birthday. He boozes, gambles, and shakes his legs with childhood friend Sathyava (Bobby Simha) and his son (Sananth), only to get caught red-handed by his family, the next morning. Guess what happens next? His family leaves for boozing. Broken down, he starts leading a life that he dreamt of. Years later, his son Dadha (Dhruv) gets into the picture to hunt down his father’s network.

There are a few highlighting traits in the movie, where it might not be an easy piece of discernment for the audiences, especially, commercial film lovers. There’s a famous quote by Osho that reads “A Good Man with More Perfection and Discipline are the most egoistic entities on this planet. This becomes very much evident with the wife character played by Simran and the entire family, which sticks to the disciplinary moral of Mahatma Gandhiji and even doesn’t care about leaving the man, who got boozed for a single night. This might look outlandish, but still, there are few, who are inclined to their principles, and unforgiving nature. However, Karthik Subbaraj fails to focus on this aspect, and somewhere in the middle, the story gets directionless, where he starts recreating the Quentin Tarantino influences. If the director had clearly tried to bring in the emotional elements involving the Father-Mother-Son, the film would have gained more intensity. Moreover, these talented actors would have emoted extraordinarily in such situations. Bobby Simha delivers an impeccable performance. However, with the major portions of the film completely revolving around Mahaan and Sathyavan, a familiar actor on par with the stature of Vikram would have escalated the value. We don’t mean to say that Bobby isn’t eligible, but still, the characterizations would have got more substantial.

Getting to look into the flip side, the musical score by Santhosh Narayanan turns out to be a disappointment. As abovementioned, Karthik Subbaraj tries to incorporate his Hollywood influences, which gives ample space to the music director for doing the same. But they seem to forget that it’s a Tamil movie. The songs and background score in no way look befitting for the movie.
The running length of this film becomes a hampering aspect. To be precise, the last 25 minutes of the film alone has lots of impressive twists and turns, where the leading actors get the scope to perform, or else the rest of the movie is the repetition of scenes.

Finally, the film is actually a character-driven movie, where the antagonist is not the politician, but the family that punished Mahaan for no reason. If the director had focused on this trait, by bringing up emotional conflicts, instead of showcasing them through dialogue, in the end, it would have struck well to the perception of general audiences. However, it’s a good watchable show for the filmmaking style, presentation of performances of actors.