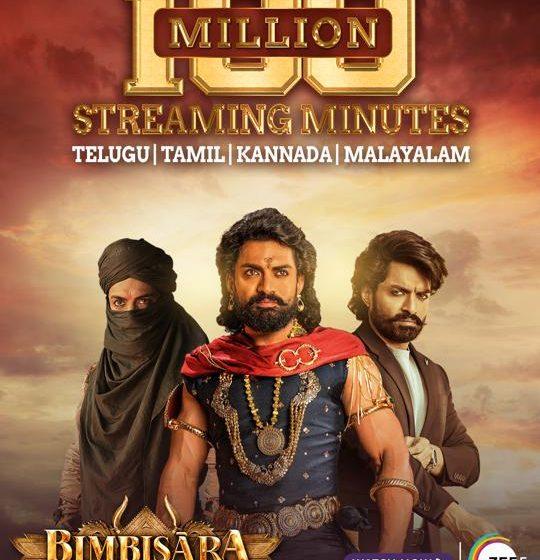 Nandamuri Kalyan Ram’s Bimbisara becomes a massive success on ZEE5; Hits 100MN Streaming minutes! CHENNAI: ZEE5, India’s largest home-grown video streaming platform, premiered the blockbuster fantasy action Telugu film ‘Bimbisara’ on the platform on Diwali, in Telugu, Tamil, Kannada and Malayalam. While the film was a massive success and critics favourite during the theatrical release, the premiere of the digital platform was no less than a Dhamaka. Within 48 hours of the premiere on ZEE5, the movie went on to clock 100 MN streaming minutes and witnessed the Biggest Diwali week opening on ZEE5 India. That’s not all, fans of the movie went gaga and celebrated the success at Vijayawada, Hyderabad. The audience witnessed Bimbisara fans showering love and splashing flowers on their idol’s (Nandamuri Kalyan Ram) life-sized cut-out. This Diwali was indeed a great time for the platform, the makers, and the actors to celebrate! Produced by N.T.R Arts and written and directed by debutant Mallidi Vassishta, the critically acclaimed Telugu film premiered ZEE5 from 21st October 2022