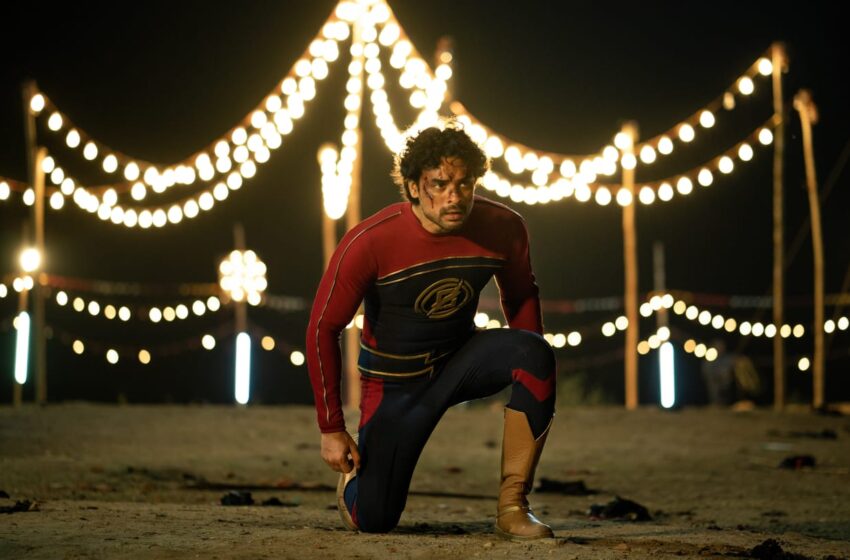 NETFLIX SURPRISES FANS WITH A BONUS TRAILER OF MINNAL MURALI, THE UPCOMING  SUPER HERO FILM~Minnal Murali, starring Tovino Thomas and directed by Basil Joseph, will premiere worldwide on December 24, 2021 only on Netflix~  Images clean/ branded Trailer Link  Mumbai, XX , 2021:  Netflix surprised fans with a bonus trailer of Minnal Murali today that peeks into the superhero universe and leaves you intrigued at all the possibilities. Minnal Murali, the upcoming super hero film on Netflix has been breaking records and stealing hearts across the country.  Lightning power, an epic origin story and the tale of good us. evil, the trailer that was released today promises to evoke a range of emotions and captivate audiences, making it the perfect Christmas holiday movie. The film will premiere in Malayalam with dubs in Tamil, Telugu, Kannada, Hindi and English. Tovino Thomas will star in the upcoming super hero film as the super human ‘Minnal Murali’, alongside Guru Somasundaram, Harisree Ashokan, and Aju Varghese in pivotal roles. Produced by Weekend Blockbusters (Sophia Paul) and directed by Basil Joseph, the super hero film will premiere worldwide on December 24, 2021, exclusively on Netflix. Talking about the trailer, Filmmaker Basil Joseph said, “I am delighted and over joyed with the response to the trailer. In order to keep our fans guessing, we decided on sharing a sneak peek of what is to come, through this bonus trailer. Our endeavor is to give the audience a good movie and to entertain them through the film. With the bonus trailer we hope the audience are intrigued and are as excited about watching the film as we are to show it to them” Producer Sophia Paul of Weekend Block busters added ,“Our goal was to make Minnal Murali a well-rounded film and a family entertainer with something for everyone. Along with the story, it is the amazing cast who have all delivered surreal performances and the crew whose efforts will make people want to watch the film again and again. The bonus trailer will surely leave the audience super excited for what is to come.”  Minnal Murali will take you on a triumphant journey of good versus evil on December 24, 2021 Producers Weekend Blockbusters (Sophia Paul) Director Basil Joseph Actors Tovino Thomas, Guru Somasundaram, Harisree Ashokan, Aju Varghese,Writer, Screenplay, Dialogue Arun  A.R,  Justin Matthews,  Lyrics Manu Manjith, Music Shaan Rahman, Sushin Shyam.

Netflix is the world’sleading streaming entertainment service with 214 million paid memberships inover 190 countries enjoying TV series, documentaries and feature films across awide variety of genres and languages. Members can watch as much as they want,anytime, anywhere, on any Internet-connected screen. Members can play, pauseand resume watching, all without commercials or commitments.

Weekend Blockbusters debuted in 2014 by co-producing Bangalore Days, the first Malayalam movie that had a successful theatrical run in major metros outside Kerala, was one of the highest grossers in Malayalam cinema and is still revered as a cult movie across south India. The second production was the festival favorite and award winning Kaadu Pookkunna Neram which was directed by Dr Biju in 2016. The next film was the commercially successful Mohanlal starrer domestic drama Munthirivallikal Thalirkkumbol, directed by Jibu Jacobin 2017, followed by a comedy road movie Padayottam, starring Biju Menon in2018. Minnal Murali is Weekend Blockbusters most ambitious project to date, to be released in major languages in India in 2021 and will be followed by Bismi Special, starring Nivin Pauly.