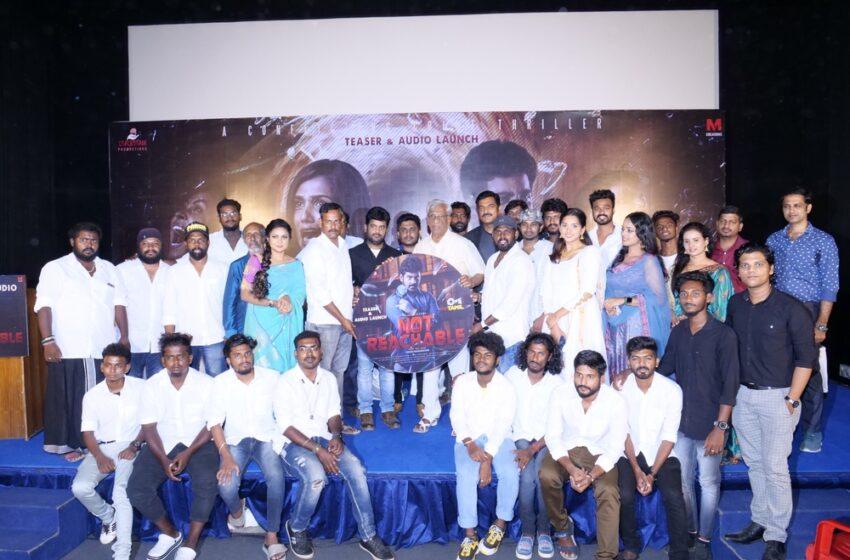 Bankrolled by Crackbrain Productions and directed by Chandru Muruganandham, this thriller that is certain to draw the viewers to edge of their seats has Vishwa, Sai Dhanya and Subha in the lead roles. All post production work has been completed and the film is expected to hit the screens soon. At this point, the film’s Music and Teaser were released in a grand manner in the presence of famous film personalities, main cast and crew and the Media. 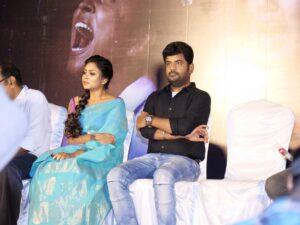 In his speech, Chandru said that this was first made as a Pilot Film which gave an idea to the producer about its making and he extended all support. I would like to place on record my sincere appreciation to the debutante composer and also to the cinematographer who gave me what I wanted using low key lighting. Due credit should be given to Vishwa, Sai Dhanya and Subha and others who cooperated very well. The producer extended so much of patronage that the film could be completed in a very short time. I also thank him for arranging this event in such a grand manner.

In his speech, composer Saran Kumar said that he is very happy such a big Music Launch Event has been organised for his debut film. ‘ Only one song was planned in the film to start with but subsequently it was decided to have some more songs to make it more interesting and enjoyable. We are yet to release one song from the film which would reflect the entire story. I am sure you will all like it. I thank one and all.

Actor Visha said that the director is highly talented and came up with very ideas while making this film. All others in the cast too gave their best. I thank the entire team for their co-operation.

In her speech, Subha said that both the Director and Composer are new but they both have done their best. I thank my Mom who has supported me in my dream of becoming an actress. I have been appearing in character -oriented roles and I am sure I shall win soon. I thank you all for your support.

Director and Film Critic, Cable Shankar said that it is nice to see that lot of new talents are emerging from Coimbatore and this team is the latest addition. It is a challenge for such newcomers to release the film in theatres. But of late, the avenue of OTT is booming and hence I suggest that this team utilizes that source well. A lot of content is the need of the hour on the OTT Platform and they can make use of that opportunity. I also suggest that they hold the rights of the themselves which will help them later.

Actor Karthik said that he recollected the Press Meet of his film Peechangai which was held at this same venue. The Teaser of Not Reachable looked promising. There are very many new talents available but it is difficult to get a producer who would support those talents. Vijay Sethupathi Sir was initially supported by many new producers. But things have changed a lot now. Talent should meet opportunity and that ‘ s the only way to win. I wish the entire team wholeheartedly.

Actor Arunkanth welcomed the new team from Coimbatore and wished them well. He also said that there is a misconception small films wouldn’t run. Hence there is no patronage for small films. Small films can achieve big things. Please patronize them. I wish the team best of luck.

Actor Praveen said that his film’ s Press Meet was also held at the same venue. I am glad that this new team has come up with such a project . More than producing a film, the aspects of doing publicity and marketing it have gained prominence. I wish the team good luck. 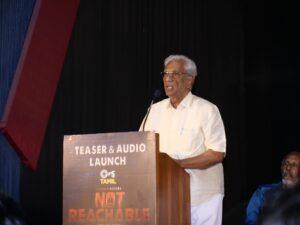 K. Rajan said that such new teams should come in large numbers and win. It is those small producers who contribute to the existence of the film industry while the big timers make use of the film industry to their own advantage with the support of big heroes. Ultimately, they do nothing for the film industry. Also, shooting is scheduled outside States while the workers here are made to suffer owing to lack of opportunities. I have appealed to Rajni Sir about this. More than producing a film, releasing it is the biggest challenge. People are prepared to watch releasing films is becoming difficult. I am sure that Not Reachable will reach out to the audience successfully.