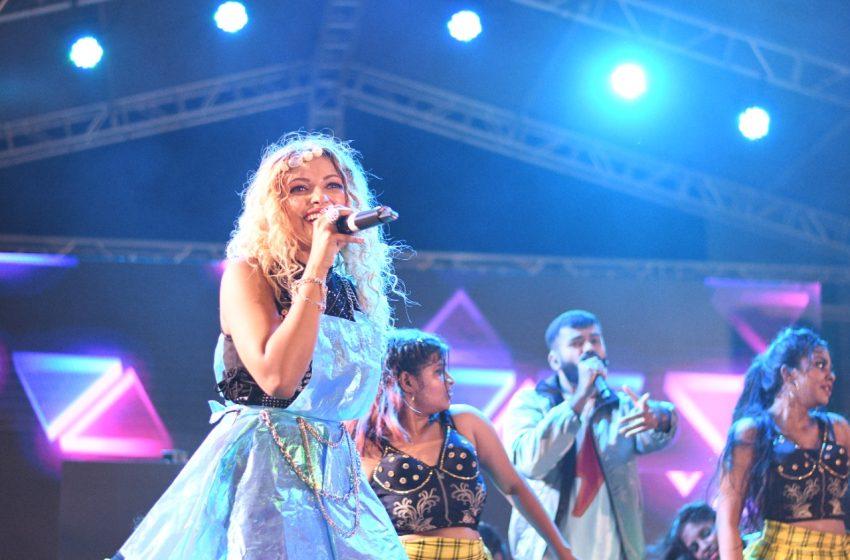 People said that they had a very new experience. This is the first time, they have experienced a proper concert which use to take place in abroad like that of Beyoncé, Shakira, JLo, Nicki Minaj.
The support which people gave was so new , coz no other independent artist, got this huge support., where people where reciting the name “Iykki Iykki Iykki “ ., and sang all of the independent songs of Iykki Berry., her fans even memorised the set list of Rapsilla concert, which was released by Iykki Berry on her Instagram.. costumes which iykki wore on the concerts were of international standards, reminded us of Lady Gaga.,

The highlight of the show is the performance of Iykki Berry’s latest release THALAYAATTI BOMMAI from THINK ORIGINALS by Think Music. She performed Thalayaatti bommai song for the first time in front of over 2000 people.. and got a very huge response., children standing and jumping in the front row where rapping “Puliyum poonai dhaan while playing in the water”. Where the whole crowd, sang “KUYILUKKE KUYIL PAATTA, mayilukke maanada , mannodum ponnodum vandhadi kondadu makka “
And they requested Iykki Berry to sing the song again.. and the song Thalayaatti bommai which is fusion of Tamil Folk and Reggae has made the people go crazy in the concert.,

The her previous release RANI from Think Special by Think Music, went viral., where the children cried to come on to the stage with iykki to dance with her.. the repetitive hum “gimme gimme yor gimme gimme yor” has become children’s rhyme..
Dev Major who has produced and shot almost all of iykki berry’s hits, has run the whole show by his extraordinary mixes., the show was directed by Kavya G who is also the choreographer and director of the iconic song Thalayaatti Bommai.,
Music producer Jaystellar, rapper Jags esan, and K Pop dance artists had featured in RAPSILLA concert.,

At the end of the show, The choreography, the light effects, the song mixes, costumes, Iykki Berry’s power packed non stop performance made people to call her “MADONNA OF MADRAS “ this becoming a huge inspiration to the next generation.,