By the beginning of this series, the audiences are given a clear picture what the story is all about. It revolves around the feud between two villages – Thamarai Kulam and Mullaiyur. The former being the ruling class community has always strived to keep the other ones degraded and low for ages. When the people of Mullaiyur demand for free farmlands as a token of appreciation for their hard work in irrigation, the heads of Thamarai Kulam resent their request with worst gesture, which makes scenario worst in terms of ‘Jallikattu’. 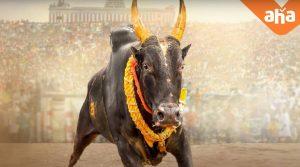 This is the first-ever time, we are coming across a Tamil web series set against the rural backdrops and the one that deals with the native nature of these backdrops. A special appreciation to director Vetrimaaran and Aha Tamil for coming up with this concept.

What stands out as the major attraction in this series is the making style and storytelling pattern. Getting on with the making part, the technicians have delivered an impeccable spell. Velraj’s cinematography is a major plus. Say for instance, the way, he captures the arrival of bulls and cows from the bird’s eye angle are inspiring. On the other hand, Sepia tone has become a mandatory element in capturing visuals for period and rural based movies. It would be better if some cinematographer breaks this clichés and comes up with something fresh. The Jallikattu scenes have been decorously filmed. The title song by Santhosh Narayanan is gripping. The background score by Santhosh Narayanan, Pranav and Karthik are at its best. In fact, the musical score enhances the visual elements too. The intriguing part about the series is that the audiences aren’t mere spectators, but we are commuted straight into those lands.

When it comes to performance, this is a character-driven premise, and we get to see proper and pivotal prominence for every character.

Kishore and Vela Ramamoorthy are the showstoppers. Kalaiyarasan’s role is no different from his erstwhile movies, where his screen presence is limited. For the first four episodes, we see that the premise is dark, and it’s all about betrayal and vengeance. However, by the end of fourth episode, we get to see some feel-good romance popping up. Kudos to the writing the team for an engrossing narration! As the story steps into the second half with 5th episode, we tend to see a balance.

On the whole, Pettai Kaali is engrossing for the first five episodes.