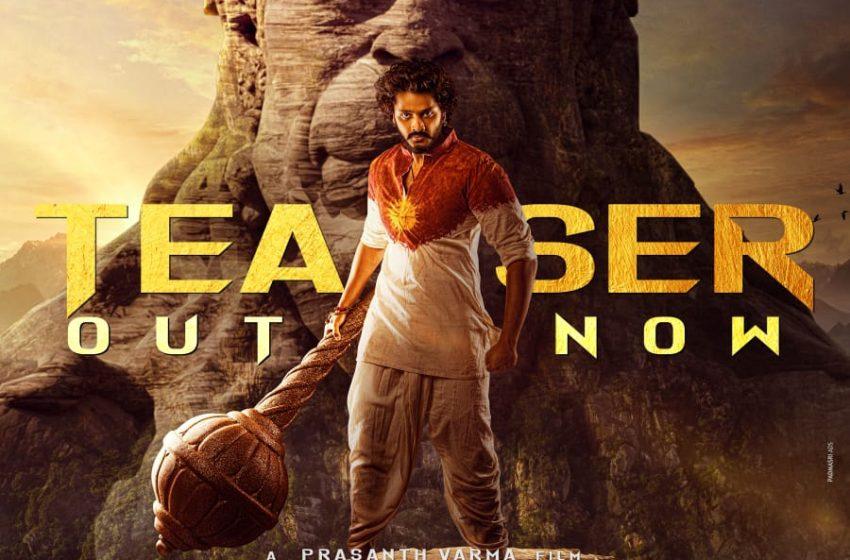 Prasanth Varma previously introduced Teja Sajja’s character through a glimpse which created a huge impact among cine-goers. Later he introduced other lead characters through posters. Today, he came up with something unimaginable. The crazy Pan India film’s teaser has been unveiled today.

The teaser begins with showcasing a waterfall and a massive HANUMAN statue in a standing posture with a mace in his hand can be seen. In the background, we can hear the chanting of Ram to give a devotional ecstasy in the end.

A light in the hill with some creatures doing the act of circumambulation (Pradakshina) gives us the sign of the arrival of the ‘Supreme Being’. The quote- The Ancients Shall Arise Again, states the same.

Teja Sajja makes an entry as an underdog who lies unconscious on the shore of the sea. The fearful face of Amritha Aiyer, followed by the solar eclipse indicates the advent of evil. Vinay Rai is the ‘Man Of Doom’ and he is petrifying. Varalaxmi Sarathkumar makes an entry as a bride who bashes baddies with a coconut palm.

The transformation of Hanumanthu from an underdog to a superhero is a sight to behold. Holding a mace, standing tall on the hill with a helicopter approaching him, and finally showing his superpowers by flying in the sky, it looks as if he’s possessed by Lord Hanuman. The last visuals of Lord Hanuma performing Tapas and chanting Ram will blow our minds.

The masterwork of Prasanth Varma and his team can be ostensible in every frame and we are transported to the astonishing world of Anjanadri through this 121-second visual extravaganza.

Shivendra makes us glued to the screen with his amazing camerawork, wherein the music director Gowrahari makes us fall into a trance with his incredible background score. Production designer Srinagendhra Tangala created a fantastic fantasy world. The production values of Primeshow Entertainment are wondrous. The VFX work is of top-notch quality and has elevated the scenes to a new level.

Teja Sajja is a champ in the making and he looks very much convincing as the superhero. From his get-up to his body language to his action, everything is just spectacular. Amritha Aiyer looks like an angel. Others played their parts efficiently.

The teaser has set sky-high expectations on the movie and we can’t hold our excitement to watch the movie on big screens.

The film is produced prestigiously on a grand scale by K Niranjan Reddy, while Smt Chaitanya presents it. Asrin Reddy is the executive producer, Venkat Kumar Jetty is the Line Producer and Kushal Reddy is the associate producer.

HANU-MAN is presently in post-production stages and the makers will soon announce the release date.