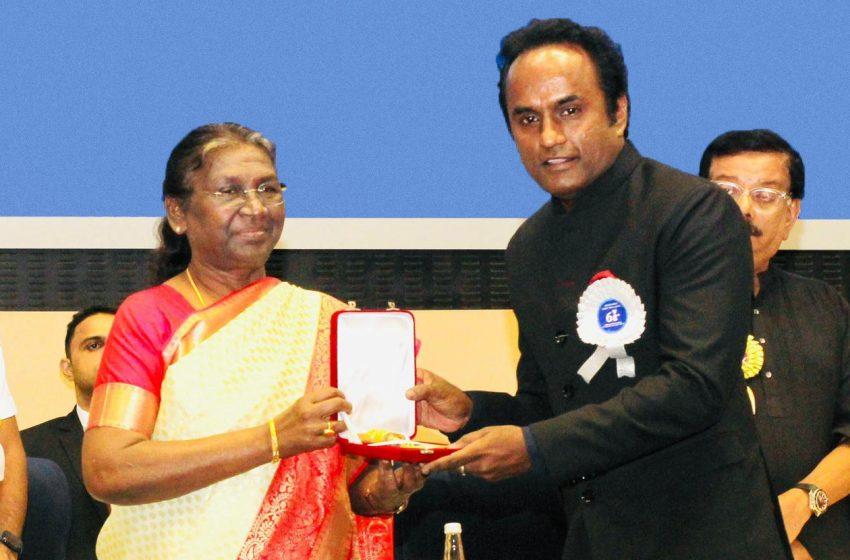 We are extremely honoured to win the prestigious 68th National Film Award for Indira Gandhi Award for ‘Best Debut Film’ of a Director as Producer for the film “Mandela”(Tamil) for the year 2020 which was presented to Mr.S.Sashikanth by The Hon’ble President of India, Smt. Droupadi Murmu during the Award Ceremony held yesterday, the 30th of September 2022 at Vigyan Bhawan, New Delhi.

Mr. S. Sashikanth, shares – I take this opportunity to thank the Directorate of Film Festivals, Ministry of Information & Broadcasting – Government of India, the National Film Development Corporation, the entire panel of Jury members for nominating and awarding our film with this prestigious award.

I would firstly like to congratulate the director Mr. Madonne Ashwin for winning the 68th National Film Awards – ‘Indira Gandhi Award for Best Debut Film of a Director’ and ‘Best Dialogue’ – both for “Mandela”. I would also like to whole-heartedly thank and congratulate Director Mr.Balaji Mohan who was crucial in identifying, backing and realising this gem of a film “Mandela” as it’s creative producer.

YNOT Studios was found in 2010 with a sole notion of backing content-driven ideas and promoting exciting talent in films and in the process I have taken great pleasure in being involved in the debut of many fascinating talents such as directors Mr. C.S.Amudhan, Mr. Balaji Mohan, Mr. Madonne Ashwin & Mr. Nishanth Kalidindi. I am glad to receive the Award in this specific category, which I feel is a collective acknowledgement of our decade-long efforts. We have also signed a long line-up of new talents, who will be debuting in our upcoming slate, and I believe this Award will serve as a huge motivation for them, as much as it is for myself.

I would like to thank and congratulate our studio partners Reliance Entertainment, our distribution partners, stakeholders, all the actors, technicians & service providers, and the entire team of YNOT Studios who had come together to make this film a possibility. I would like to thank the Press & Media for the unwavering support and love we have received as a studio over the years for our efforts, and especially for “Mandela”. I have always firmly believed that a film will find it’s audience and the love that “Mandela” has received and continues to receive from across the globe, beyond cultural and language barriers, is testimony to the fact that audience is always ready to embrace quality content, and I wholeheartedly thank the audience for celebrating “Mandela”.

I would also like to congratulate all the Winners of 68th National Film Awards, especially Mr. Suriya, Mrs. Jyothika, Mrs. Sudha Kongara, Mr. S.Thaman, Mr. G.V.Prakash Kumar – who are all dear friends of mine who continue to inspire with their work ethic and constantly push boundaries creatively.