Filmmaker Prabhu Solomon’s ‘Sembi’ is a travel based intense drama that laces emotions and raciness together. The film features Kovai Sarala in the titular character with a child artiste Nila. Ashwin Kumar Lakshmikanthan performs yet another title role in this movie. Nivas K Prasanna is composing music for this film. When a 10-yr old Sembi (Nila) is sexually assaulted by three miscreants with one among them being the son of politician (Nanjil Sampath), the girl’s grandmother (Kovai Sarala) thrashes down a corrupt police officer almost to death and elopes along the kid to escape from clutches of cops. With a legion of police department looking out for them, both get into a bus, and come across a stranger (Ashwin Kumar), from where the story takes a turn.

Prabhu Solomon and geographical concepts have been inseparable. He makes sure that locations are an integral part of his movies. Significantly, he inclines to similar motif in ‘Sembi’ that owns a spectacular visual treat. However, the dew capped mountains often relate to the soft breezy Rom-Coms or family entertainers, but here the scenario remains to be a contrastive one. The film opens almost on a cold-blooded note, where the innocuous soul’s cry and the grandmother’s emotional outburst would pierce our attention. When you’re brimmed up with assumptions that it’s going 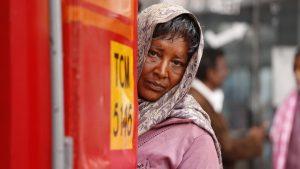 to be a grandma’s revenge or run for justice, the story abruptly takes an unexpected turn with the arrival of Ashwin Kumar and other supporting characters. Especially, a comedian like Thambi Ramaiah and his lame jokes don’t do any favours for the film. The supporting characters including the Vlogger, a couple of teen girls, and few others, who unify for saving the little girl add some value to the screenplay. On the flip side, some of them look forcefully included for the sake of commercial elements.

Despite having some loopholes and logic issues, the raciness in the screenplay eclipses those little minuses.

The technical department has strived and offered the best for a top-notch experience. The visual works are worthy of extols. Nivas K Prasanna’s songs might not be a takeaway for the audiences, but the BGM is extraordinary.

Despite having some little drawbacks that includes too many conversational scenes, the film picks up momentum in the second half followed by gripping second hour and an experimental climax.

Verdict: Can give a try for the efficient work of entire team