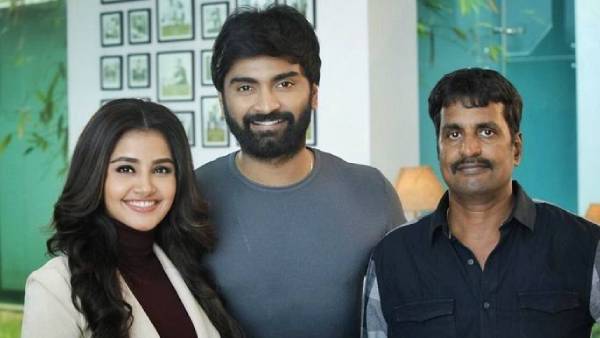 Atharvaa Murali and Anupama Parameswaran – The cutest onscreen pair are playing the lead roles in ‘Thalli Pogathey’, directed and produced by R. Kannan of Masala Pix. The movie is all set for the worldwide theatrical release on October 14, 2021. The cast and crew of this movie was in Chennai to interact with the press and media during the Pre-Release event.

Here are some of the excerpts from the movie.

Director R. Kannan said, “It’s been 10 years my journey started with my directorial debut Jayam Kondan, and producer Thyagarajan sir happens to be the main reason. I believe of getting good reviews like how I got in Kanden Kadhalai. Ram Prasad has been a great support for this movie. Gopuram Films Madurai Anbu has been a great support for this movie. I am associated with Kabilan movies after Thalli Pogathey. Amitash has exerted an incredible effort towards elevating the movie. Atharvaa and Anupama have been the main soul of this movie. The movie is getting released on October14, 2021 and it will have a great impact upon audiences.”

Magic Rays Thiruvengadam said, “I have a journey of 10 years in the movie industry and have released many movies. Thalli Pogathey is a wonderful movie. We wanted to release it earlier, but got stalled due to the COVID-19 issues. This will be a milestone in the career of Atharvaa. Amitash has done a fabulous job in this movie. Ram Prasad’s midas-touch is going to be the success element in this movie. Kabilan has captured everyone’s attention with his lyrics. This movie will be a great experience for all in the theaters.”

Actor Atharvaa Murali said, “This is a press meet that is happening after a couple of years. During this period, everyone has come across various problems in their personal space. I am happy and glad to see everyone here. When I and Kannan sir decided to make our next movie after ‘Boomerang’, we wanted it to be a family entertainer. Kannan sir organized a team overnight and when we thought about the adaptation of Ninnu Kori, Kabilan sir was the first one to come onboard. Later, it was the technical crew like Gopi Sunder sir and others, who have been the pillars of this movie. The first choice for the female lead role was Anupama and she instantly agreed to the role. But we were in deep pursuit of an important role and after a long search, we got Amitash onboard. I have to mention about Ram Prasad sir here, who has been the backbone of Kannan sir here. Kannan sir is really an extraordinary person to work with. His nature of work reminded me of my childhood days, where elders used to advice ‘Don’t waste any time’. For a particular episode, I had to grow my beard, and asked me how long it will take for me to groom it. After three weeks, I called him to show my beard look and I could hear him say ‘Action-Cut’ somewhere. I was quite surprised and shocked to hear this statement and asked him that if he is shooting other portions that doesn’t involve me. Apparently, I asked him and he said that he was shooting another movie and had completed the shooting, which was nearing completion. While many of us had remained inside homes during this hard phase, he has completed 3 movies. Thalli Pogathey will be a delightful entertainer for the audiences, especially families. The movie is hitting screens on October 14. I thank director Kannan sir for his ability and efficiency in getting the movie released in the theaters. Anupama is a natural performer and the language is no barrier to her. This will be an important movie to her. Thyagarajan uncle being here is really a big support and I thank him for his presence here.”

Actor Amitash said, “I thank everyone for coming here for the event and supporting us towards the release of this movie. I thank Kannan sir and distributors for making the theatrical release happen. When Kannan sir narrated me the script, I was really excited and immediately felt that my character has a depth. The entire movie revolves around three characters, and I believe that I have got an opportunity to express and exhibit my potentials in this movie. We are missing Anupama here. She has done a fabulous job in this movie. This is more like a female centric movie and her performance will be lauded in this movie. Atharvaa is someone with whom you get a feeling of having been acquainted for over a long time, a childhood friend indeed. Both of us become friends during the first day itself and we then got much closer during the foreign schedule. Now we have been so much friendly. He is one of the sweetest persons I have met till now. He has now become a stunning physique. Atharvaa will be much different from what you all have seen in Navarasa.”

Kabilan Vairamuthu said, “I almost became a character in the movie Thalli Pogathey after writing dialogue and lyrics for it. It was a hard thing to see someone with a smiling face during this Lockdown phase, but Kannan sir was overwhelming with confidence and self faith and I could feel the positive vibes whenever I met him. My friend used to ask me always if there would be any movies in the near future in Tamil cinema without any bloodshed or gory violence and I have the answer – Thalli Pogathey. I was astounded looking at the performance Atharvaa Murali. Anupama, Atharvaa and Amitash have done a great work with this movie and it will be a good experience for audiences in the theaters.”

Producer Thyagarajan, Sathya Jyothi Films said, “Atharvaa is a sweet person and I have seen him from his childhood. His father Murali has been my close friend for years. When a newcomer narrated me the script of Baana Kaathadi, we wanted someone fresh and expressive and that’s when Atharvaa Murali became our choice. And now, he is looking very handsome. I saw the performance of Anupama in the movie Kodi, and I wanted her desperately to be a part of Pattaas, but she couldn’t make it due to the date issues. Amitash is someone, who is known to me from childhood. He has a bright future. Ram Prasad is a good and outstanding technician. Kannan is like a brother to me and he will definitely scale great heights. I thank Thiruvengadam for his support towards this movie in making it have a theatrical release.”