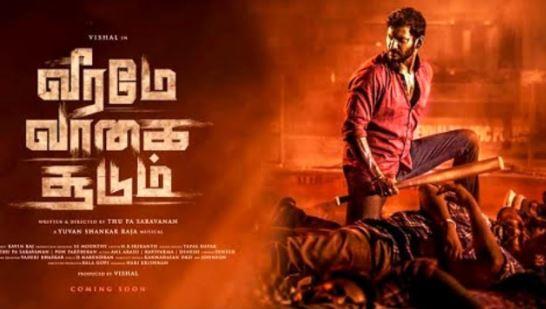 Actor Vishal has proved his proficiency in action-thriller movies, both as a producer and actor. His movies like Pandiya Naadu, Naan Sigappu Manithan, and many movies of this league have earned him a good reputation. After watching the visual promos of Veeramae Vaagai Soodum, we were brimming with strong hopes that it’s going to be a comeback film for Vishal, whose last year releases Chakra and Enemy have been merely mediocre.

Porus (Vishal) is waiting for his results of the Sub-Inspector examination. His family comprising his father, a constable (Marimuthu), mother (Tulasi), younger sister (Raveena), and his girlfriend Mythili (Dimple Hayathi) has been his source of happiness. When everything looks picture-perfect, the sudden murder of his younger sister leaves Porus no option, but to hunt down the killers, who are beyond his reach with high influence and power.

Vishal has always done his best to keep himself so much bound to his characterizations. VVS is no exception as he delivers a mind-boggling performance in emotions and action scenes. Dimple Hayathi has nothing much to perform in this movie, and, the film would do good, even without her portions. Raveena as Vishal’s sister remains a decent show-stealer. Malayalam actor Baburaj looks like a gruesome villain by the beginning but sooner loses his substantiality. Yogi Babu’s comedy tracks don’t evoke laughter. He has to pay more attention to his routine mode of adding dialogues during the dubbing portions as it looks odd in many places. When it comes to the technical aspects, filmmaker Thu Pa Saravanan has come up with a script that is a time-and-again tested formula in Tamil cinema. Hero avenging the death of his close and dear ones isn’t something out of the box, but he could have made it an engrossing show with his writing skills. In contrast, we are pushed into boredom for the screenplay gets so feeble and directionless after a certain extent. When we have predicted what’s the climax even before the intermission, and with the storytelling taking the same route, what’s there to get excited and engaged? There are so many characters in the film, and most of them have no purpose. They have mercilessly culminated with tragedy, which starts irking you to a certain extent. The musical score by Yuvan Shankar Raja is captivating in BGM, but he fails to offer us chartbuster songs. The cinematography involves bleached visuals, and we aren’t able to discern the right reason behind this flaw. The editing is good in a few places. The action blocks are the greatest attraction as they are choreographed brilliantly. It looks like Thu Pa Saravanan impressed Vishal with his narrating skills, but he eventually falls in bringing it perfectly onscreen through his directorial skills. We hope, he rectifies his mistakes and comes up with a promising outing soon, especially keeping logical quotients in mind. It’s over and again disappointing to see a talented actor like Vishal delivering movies that don’t have engaging elements despite his powerful performances.

Verdict: The film does throw up some expectations by the first hour, but gradually declines into a state of boredom and predictability in the second half.