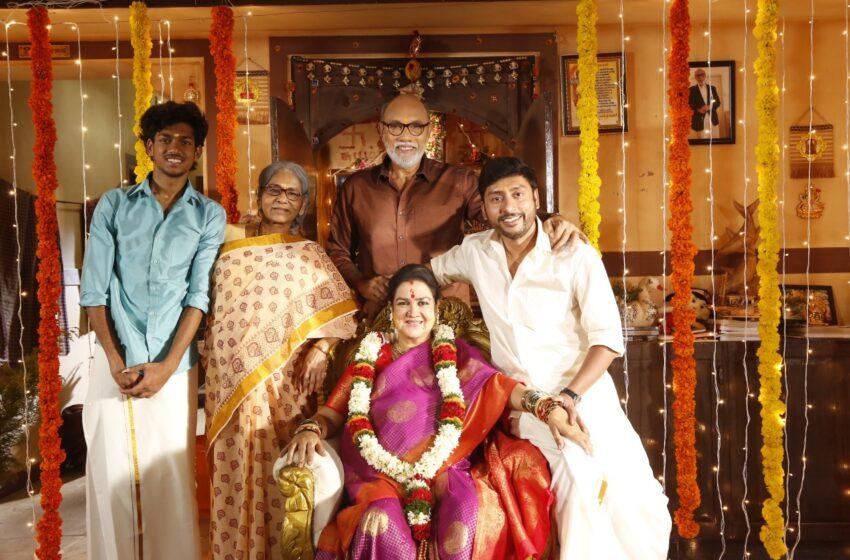 The Indian middle-class is a unique entity. Over the years, many filmmakers across many languages have made attempts to showcase the Indian middle class in all its glory, finery, and of course, misery. In Tamil, we have seen directors like Visu, V Sekar, and K Balachander, tackle this sub-genre with success. After a point, with the increase in star vehicles masquerading as family films, such projects became far and few in between. An important and worthy addition to this dwindling list is RJ Balaji’s latest entertainer, Veetla Vishesham.

The film, which has Balaji sharing directorial credits with NJ Saravanan, is a remake of the much-loved Hindi blockbuster, Badhaai Ho. The original was a largely safe film that had the potential to be remade in many languages, and it is actually surprising that it took so long to reach the Tamil shores. Veetla Vishesham follows all the beats of the original. There’s that content middle-class family comprising of Unnikrishnan (Sathyaraj) and Krishnaveni (Urvashi), their two children Ilango (RJ Balaji) and Anirudh, and Unnikrishnan’s mother (KPAC Lalitha). There’s life in an official quarters where everyone knows everyone and wants to know everything happening in each other’s lives. There’s Sowmya (Aparna Balamurali) the love interest of Ilango. And then… there’s an unplanned pregnancy. And nope, it isn’t about Ilango and Sowmya, but… Krishnaveni and Unnikrishnan.

What follows this news is a wonderful commentary on our perceived “Indian values” and the rabbit hole of “What would people say?” Most of our families worry more about the neighbours than the legal system and moral responsibilities. However, it is refreshing to see how the interpersonal dynamics of Unnikrishnan and Krishnaveni are not sabotaged by the ‘others’. They smile, they laugh, they cry, they solve issues, and they are an almost ideal couple of their times. Of course, a case can, and should, be made about Unnikrishnan not standing up for his wife who suffers years of mental abuse from his mother. However, a largely silent Unnikrishnan loses his calm when his children question him. This dichotomy is an interesting observation that is commonplace in such films. Nevertheless, we don’t really look too much into it because there are multiple issues happening, which are deftly woven into the narrative to keep us thoroughly engaged.

The unobtrusive cinematography by Karthik Muthukumar, and the music by Girish Gopalakrishnan, who knows when to crank it up, and when to sober it down, are the strengths of Veetla Vishesham. While the film operates on a simple plot, it is embellished by the various social issues nudged at, and the strong performances by its lead cast. There is no doubt that Urvashi, Sathyaraj, and KPAC Lalitha steal the show, and prove their acting credentials to the millennial audience who might not have seen their earlier works. Urvashi brings us to tears with just one line, and so does KPAC Lalitha. They are stalwarts, and in the presence of a rather reticent Sathyaraj, who does have fun, but not the type we are used to seeing him have over the past decade, Veetla Vishesham earns the tag of being a fun-filled family entertainer that is also a worthy remake. It is heartening to note that RJ Balaji has it in him to dial it down when required, and Aparna gets a solid role, which she delivers with considerable aplomb.

The film largely follows a bunch of template scenes, but it works mainly because, at times like this, we do need to have the comfort of the familiar. It helps that a lot of our hypocrisies are questioned, but it takes the safer route and doesn’t push us to get our own defenses up. As the film kicks into high gear in the final act after a couple of meltdowns, courtesy of RJ Balaji and KPAC Lalitha, all the kinks are straightened, all the obstacles are removed, and from there it is a smooth ride to the happily ever after. While this, and the resolution of many more threads might seem like a copout, films like Veetla Vishesham are not just meant to educate but has the responsibility to entertain too. While on the former, RJ Balaji and Co just about scrape through, they do really well on the entertainment part, and well… we too might have to do some of those compromises to enjoy a film that tries to put a smile on all our faces. And… sometimes… that’s okay.

Verdict: Watch it for the old stalwarts proving that age might just be a number, but experience matters a lot too
Rating: 3 / 5