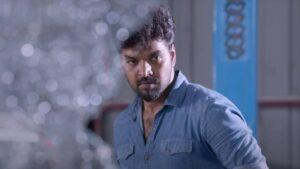 During a burglary at jewelry showroom, few innocent people are injured by the thieves at gunpoint. One among them is the fiancé of the protagonist (Jai), who is in ICU fighting for life. The protagonist now sets out to trap the culprits and settle the scores.

One thing that makes certain Tamil movies so flimsy is the writing. Be it screenplay or the way, characters are sketched looks so amateur. There is one particular scene, where Athulya protests before a Tasmac and addresses a vendor as owner. Is this a mere a General knowledge of a social activist? In another scene, we see Jai talking to his friend Kureshi, who is a cop stating, “I know the capability and potential of your police department. So I want to handle this case myself.” A protagonist’s strength should not be elevated at the cost of degrading public servants.

Well, it might be considered as the liberty of a creator, but this little and minute points lower down the intensity of a movie. The logical issues are in plenty, and we see most of the scenes being dragged. We find the cops in charge of providing security to Anjali Nair, but, most of the times, they end up losing her from their sight easily. If Vettri Selvan wanted to make a thriller, then there shouldn’t be any compromises.

Actor Jai looks totally unfocussed and vague about his role. Athulya Ravi doesn’t have any scope to perform. Anjali Nair is at her best as she delivers a convincing performance in all her scenes. Vaibhav’s elder brother Sunil is good with his performance. Vidya Pradeep has to choose some good roles as in Thadam and directors must identity her potentials rather than getting her these kind of clichéd roles.

On the whole, Yenni Thuniga is a disappointing fare that doesn’t engage us anywhere from beginning till the end.

Verdict: The movie looks directionless and unappealing throughout.