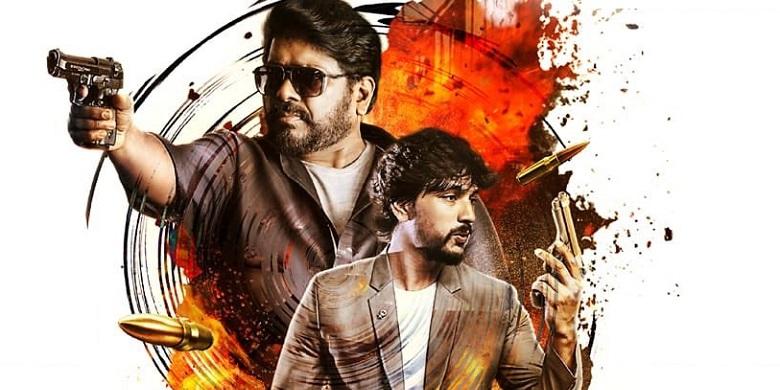 Novelist Rajesh Kumar’s works have been ample exemplification of sophisticated crime mystery thrillers. A myriad of TV series and movies have been adapted from his novels. After a long hiatus, his well-appreciated novel has been visually translated into the movie titled ‘Yutha Satham’. The film instilled a decent graph of expectations with its announcement for a couple of reasons. Director Ezhil having proved his credibility in the romance and comedy genres is spearheading his directorial into the new genre of a crime mystery thriller. The other source of attraction was Parthiban Radhakrishnan and Gautham Karthik. This rarest combination of actors from different generations of Tamil cinema sharing the screen space enlivened the anticipations.

A young girl (Sai Priya) is found murdered right outside the police station. This leaves no option but challenges the potential of inspector Kathiravan (Parthiban) to bring the murderer before the law. The girl’s boyfriend Nakulan (Gautham Karthik), a private detective is thrown into a state of huge shock on seeing the dead boy of his girlfriend at the same time and place. Infuriated over the gruesome death, Nakulan decides to set out and find the culprits and seek revenge. So who’s going to hunt down the killer first? Is it Kathir or Nakulan? This forms the basic premise of this story.

As abovementioned, director Ezhil deserves special appreciation for his confidence to take the leap from one genre to the other. However, he could have worked properly on the script to deliver a commendable piece of work. The entire project looks like something done in a hurry. The first half has some engrossing moments. Especially with the knots getting unveiled one by one, we are somewhat kept engaged, looking forward to the mystery to be unraveled. However, the post-intermission sequences lose their briskness and fail to connect with the characters. Even the way, the climax twist is revealed, could have been impactful. Instead, it turns out to be a humorous one. Parthiban’s one-liners keep tickling our funny bones in many places. However, Robo Shankar trying to get into that space looks disappointing. His style of comedy looks stereotypical, and it would be really nice if he can rectify it in his forthcoming project. Sai Priya and others in the star-cast have a very feeble scope. Even Gautham Karthik looks directionless after a certain point in time. This is a movie that deserves a high-quality making and gripping narration, but since, Yutha Satham fails to deliver it, the entire substantiality of the story gets wasted.

The musical score by D Imman is just okay. This is the first time; he has stepped out of his routine work and has more scope for re-recording alone. In a few places, he has exerted his best efforts that actually enhance the quality of this film, and depth of concept revolving around sound dope. In other words, the binaural score has been neatly done.

On the whole, Yutha Satham would have been a delightful experience for the audiences, if director Ezhil had worked a lot on the screenplay. For now, it remains just a middling fare.

Verdict: The concept and story is appealing. However, the feeble screenplay fails to impress us.