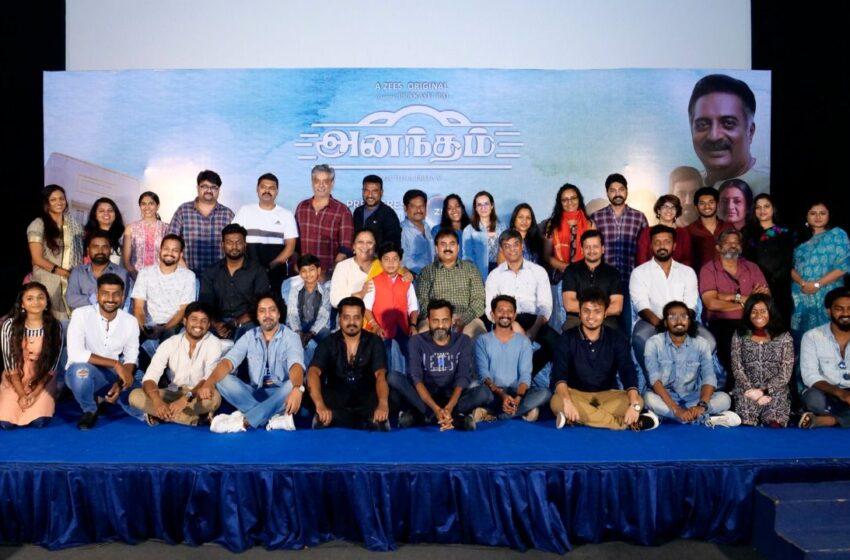 ZEE5 has created an impeccable record of delivering outstanding Original movies and series to the audiences. In a short span, the reputed OTT Platform has found extolments and wowing reception from the audiences, who become inquisitive about its forthcoming launches. Apparently, it’s time to experience yet another tale of unparalleled paradigm titled ‘Anantham’ Original series, directed by Priya V, who has already directed hit films “Kanda Naal Mudhal” and “Kannamoochi Yenada”. The show comprising 8 episodes features Prakash Raj in the lead role, and the others in the star cast include Aravind Sundar, Sampath, Vivek Prasanna, Vinoth Kishan, John Vijay, Vivek Rajgopal, Indiraja, Samyuktha, Anjali Rao, Mirna Menon, and few others.

The press meet and special screening of ‘Anantham’ was held in Chennai. Here are some excerpts from the occasion.

Director Priya V said, “I am meeting you all after a long sabbatical gap. I thank Murali sir and Kaushik for a wonderful support. I started this series, just with the same little hope; I had for my movie Kanda Naal Mudhal. Everyone in the team has worked with confidence. I have a great respect and value for Prakash Raj sir. He was the one who gave me the right opportunity at the right time. No other actor than him could do justice to this role in the series. John Vijay, Sampath and all the other actors have done a remarkable job. The eight chapters will have different storylines connected through a hyperlink concept. This was a wonderful experience. I thank Ilaiyaraaja sir. We have dedicated an episode for his music, and everyone will like it.”

Kaushik Narasimhan, VP Content, ZEE5 Tamil, said, “I thank every friend from the media and press fraternity for the constant support. It’s been immense pleasure bringing new releases every month, and now we have got ‘Anantham’, which will be a new-fangled one. It will offer a unique experience for the audiences. The series is about the memories that a particular house carries. It was an interesting experience during the narrative process itself. We have worked a lot creating this series for nearly one year. We believe that you will like it as well.”

Siju Prabhakaran, Cluster Head ZEE Network said, “Initially, we had plans to make Anantham as an anthology, and Priya’s story was more gripping laced with emotions. Every actor has given their best into their characterizations. The series has 8 episodes, and Tamil audiences will love this for its entertaining and emotional values.”

V. Murali Raman, Happy Unicorn, said, “There’s a well-known proverb “Team work always wins”, and it has been illustrious with this series. We are satisfied with the output, and the futuristic success of this series depends on your reception. When Priya narrated the story, we felt it more engaging and interesting. Even Kaushik instantly asked her to get-go with the process. The entire team of ZEE5 extended their complete cooperation. The story traverses through the dramatic incidents that happen in a house between 1964 and 2015. Since the entire story takes place across the backdrops of a single house, we started looking out for the locations, and finally ended up with Aachi House, where he made a few modifications to the place and shot it. Art Director Surya has done fabulous work in this series. Cinematographer Bhagath’s visuals are going to be remarkable. We have tried recreating the Bharathiyar songs in the 8 episodes with new tunes. Prakash Raj accepted to be a part of this series, banking his complete hope on filmmaker Priya. More than 80 actors have been a part of this series, and I take this opportunity to thank them for their earnest support.”

Cinematographer Bhaghat said, “I thank Priya madam and Murali sir for banking their trust on me. The series gave me more scope to explore my potential and try many new things as it has more prominence for the story. Priya madam has made this series with the complete touch of a full-length feature movie. The entire team of technicians and actors has given their best work into this show. ZEE5 that has touched the pinnacle of success, is releasing this series, and we as a team are happy about it.”

Music Director A.S. Ram said, “Murali Raman sir and Priya Madam together are the reason behind my presence here. I thank ZEE5 for encouraging me throughout the process of creating music for Anantham. This series was more like getting paid for doing the work I love. I thank my entire team for this wonderful opportunity. I request everyone to watch the series and share your valuable response.”

Actor Vivek Prasanna said, “Darkness is nothing but least presence of light. Where there is Anandham (Happiness), there is hope. This series ‘Anantham’ shares this message in an engrossing manner. It will be a good experience and journey for the viewers as well.”

Anantham Original series premiering on ZEE5 from April 22 is about the incidents that happen in the lives of residents dwelling at different time periods in a house called ‘Anantham’ between the year 1964 and 2015. The story begins with a son, who parted ways with a family returning back to the ancestral house after many years. That’s where the story begins. The story traverses through different emotions of wonder, betrayal, success, romance, comedy and many more moments laced with memories.

V Murali Raman of Happy Unicorn has produced this series ‘Anantham’ that exhibits the multi-faceted avatar of Priya V. She has written the story, screenplay, and dialogues and directed this series comprising 8 episodes.

When it comes to Original series, ZEE5 has nailed it down perfectly in delivering best showpieces. This includes its magnum opuses like Vilangu to the Mudhal Nee Mudivum Nee. These works have been recognized as best entertainers. Besides, Ajith Kumar’s Valimai witnessed an incredible record of 500 streaming minutes within the first week of release. The film was released simultaneously in Tamil, Telugu, Malayalam, Kannada and Hindi, which were received tremendously.

ZEE5 has captured the global spotlights for its diversified contents including contents in 12 languages comprising 3,500 collection of movies, 500+ TV series, 4000+ Music Videos, 35+ Theater plays, and 90+ Live TV Channels with a yearly subscription of just Rs. 599/- only.