Very few filmmakers own a directorial panache of endowing both their protagonist and antagonist with swag. Apparently, Venkat Prabhu strongly clasped this stature a decade back with his magnum opus Mankatha, where every character had faddish mannerisms, body language, and more intensity. More than all, the film was distinctly bound to ‘MAGIC’ factors, which made VP fans ponder for recreating one such flick yet again. The reason behind citing this term is that it eventually happens with his today release ‘Maanaadu’ featuring Silambarasan and SJ Suryah in the lead characters. As you walk out of the theaters, your minds will be resonating with ‘Who the ultimate showstopper of this movie is?’ It indeed becomes a tougher task to figure out. Well, this might look a little superficial and it’s better to step into the analytical domain. 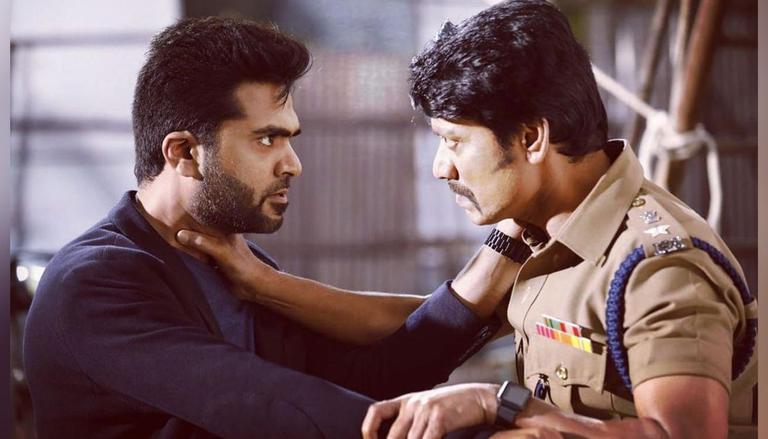 Every audience entering the theatre for this show is aware of what the film is all about? Abdul Khaliq (Silambarasan) flies from Dubai to attend a wedding in Ooty. Of course, his visit has a clandestine mission – To help the bride elope with his friend (Premgi Amaran). However, things go awry when this bunch of friends while driving fast down the hill cross paths with a notorious corrupt cop Dhanushkodi (SJ Suryah), who led by some mysterious personalities is planning an assassination of Tamil Nadu Chief Minister (SA Chandrashekar). As you know, assassination happens, and the time loop too.

There’s one particular sequence in the second hour, which is a single shot stretch of nearly 7 minutes that blatantly calls for your attention to acclaim Venkat Prabhu’s brilliance. It is obvious in such sequences that VP has written it keeping the audience’s pulse in mind, which works out magical results. When it comes to performance, Silambarasan garners applause with his screen presence, and his emotional act, but SJ Suryah keeps stealing the spotlights consistently. Incisively, after a couple of repetitions in scenes (Based on the Time Loop concept), the audience tends to get bored, but SJ Suryah’s performance pops up by the point of intermission followed by complete second-hour eclipses these diminishing aspects. Kalyani Priyadarshan, Y Gee Mahendran, Manoj, and SA Chandrashekar get a decent scope. If you’re expecting humour from Premgi Amaran and Karunakaran, you’ll be disappointed.

When it comes to the technical department, there are a few surprising factors. This is the first ever time, a movie with Yuvan-STR, Yuvan-Venkat Prabhu collaboration is happening with just a single track. The bold decision by VP needs special mention. Naturally, the spellbinding BGMs leave us awestricken. Editor Praveen KL deserves many accolades for his work. 50% of the film’s engagement and raciness is nothing but his contribution with sleek cuts.

As on whole, Maanaadu takes off on an appealing note slightly drops down its momentum in the middle but bounces back with an outstanding screenplay by the second half. The prodigious performances of actors, and technical contribution makes this film, a memorable experience for the audiences.