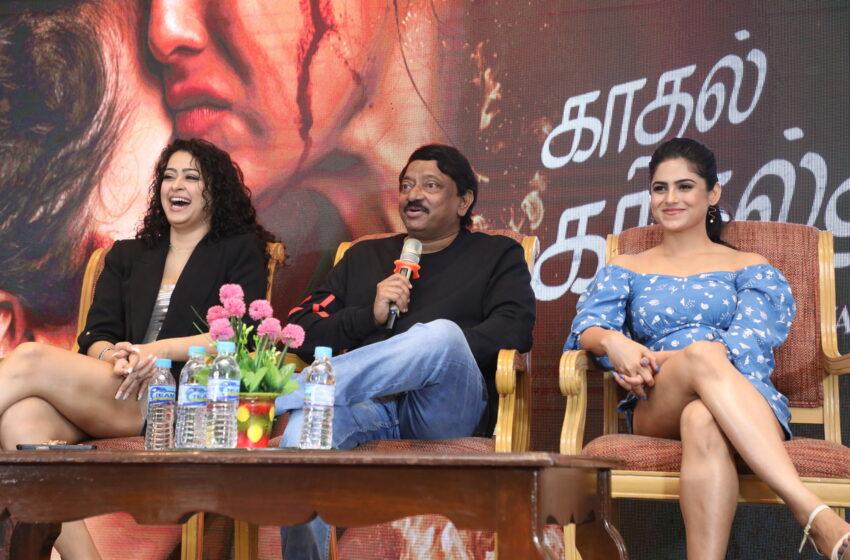 Filmmaker Ram Gopal Varma holds a great stature in the Indian film fraternity for his groundbreaking movies, which changed the face of Indian cinema. He has now made a movie titled ‘Kadhal Kadhal Thaan’, which is about two women, who hate men fall in love with each other, thereby battling the odds to retain their relationship. This is the first-ever Indian movie to be based on Lesbian crime thriller. The film is produced by Artsee Media in association with Rimpy Arts International. The movie that is initially made in Hindi will be releasing in Tamil and Telugu on April 8, 2022. The crew comprising filmmaker Ram Gopal Varma, heroines Naina Ganguly and Apshara interacted with press and meet to promote the Tamil version of this movie in Chennai.

Here are some of the excerpts from this event. 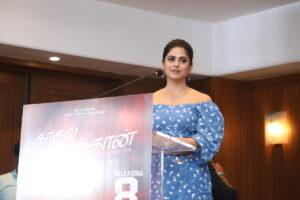 Actress Naina Ganguly said, “I thank Ram Gopal Varma for trusting me and my potential and introducing me to the Telugu movie industry. He has made a unique experiment with this movie, which isn’t an easy task. Usually, a man and woman fall in love, but this movie revolves around two women getting attracted and falling in love with each other. It was a challenging experience for me. When we started shooting for the film, RGV sir asked me to perform my role with a masculine approach. I underwent lots of preparations for this role, by observing the body language of men and reflecting it. Everyone perceives lesbians as a crime. To be precise, it’s not a crime, but a hormonal issue. I am happy to be a part of this movie that speaks about the emotions of these people.” 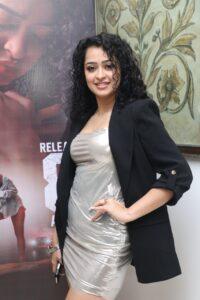 Actress Apsara said, “I am glad and elated to witness such a wonderful reception for this movie. I am excited about the movie getting released in Tamil and Telugu. I am gleeful to get introduced to the Tamil movie industry through the movie Kadhal Kadhal Thaan. There are many eminent personalities in this industry. This film is about a homosexual relationship, which is seen as a crime in our society today. However, I am so much astonished about their perception of Ram Gopal Varma on this issue. He was clear about the fact that homosexuals are not criminals, but God’s children like any other men and women. This is a commercial movie that revolves around two women falling in love. Audiences will definitely understand the emotions of these characters. This is the first-ever time, a romantic duet song is placed between two women in a movie. I am happy to be a part of a new-fangled movie. I thank Ram Gopal Varma sir and the entire crew for being a great support. I request everyone to watch the movie and support it.” 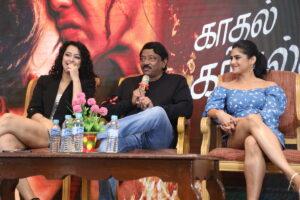 Director Ram Gopal Varma said, “The basic ideation of this film’s theme it was a unique experience to me. We also look the homosexual individuals as outcasts and aliens. Although Government has accepted and welcomed this change, we are unable to perceive them as normal people. There are lots of crime stories based on lovers, and I wanted to bring forth a change. That’s when, the inception of writing a story based on two women, who become homosexuals for some reason for some reasons happened. How the society receives them? What’s their actual issue? With so many questions brimming up over my mind, I happened to get the basic gist of this movie. Initially, Naina Ganguly was reluctant, although she liked the idea. Later she accepted to be a part of this film. 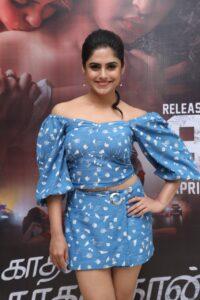 There have been lots of challenges while materializing this movie. It’s not an easy thing to shoot a duet song featuring two women in love, and it was quite a different and difficult task indeed. I thank Naina Ganguly and Apsara for their bold decision to be a part of this film. If not for their support and confidence, this film would have not been possible, I am sure, you’ll love this movie and appreciate it.”