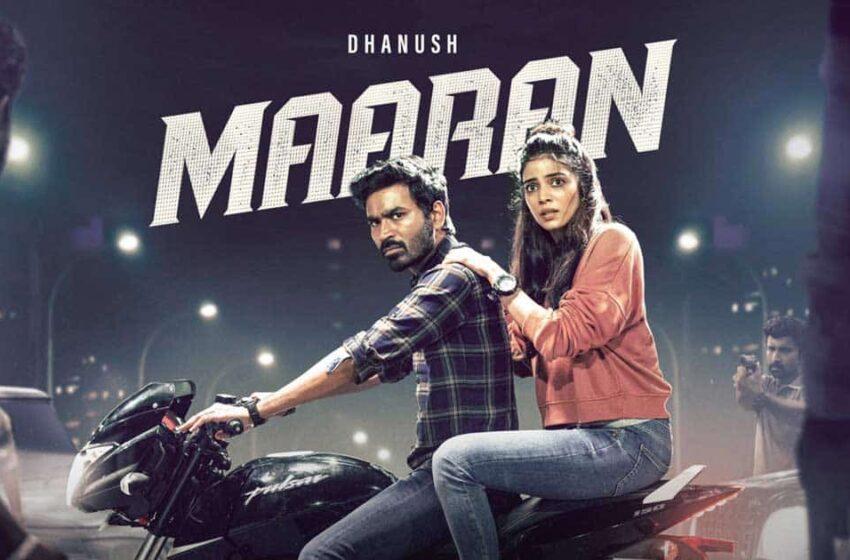 Dhanush starrer Maaran has kept the audiences excited for a long time. The major reason is his first-ever collaboration with Karthick Naren, who has never missed stealing the pulse of audiences with his unique content-driven plots and narratives… Maaran is produced by Sathya Jyothi Films, and this marks the 3rd direct OTT release for Dhanush after Jagame Thanthiram and Atrangi Re.

Manimaaran (Dhanush) is a journalist, who never gives up his professional ethics for any reason. As a part of investigative journalism, he reveals important evidence regarding a politician (Samuthirakani) that creates uncalled-for problems in his life. Things go awry, when his younger sister is burnt alive in a desolated building. What unfolds next is Maaran’s attempt to unravel the mystery? But he gets blown out of waters after realizing that a heavy play has been staged without his knowledge.

The first hour of Maaran takes its time to build the intensity of this story, and the actual conflict occurs during the point of intermission. The second hour does offer us some gripping moments. The unexpected twists and turns in the last 30 minutes deserve special mention. Well, if these are the positives, the flip side looks very much dominant. Karthick Naren has already faced this issue in his erstwhile movie of Mafia, where around 30-40 minutes of the entire film’s duration alone look promising, and other portions are plain. Even here, we experience a similar scenario of the story getting intense by the penultimate moments of 30 minutes prior to climax.

Actor Dhanush never misses to steal your attention in any given role, but there isn’t enough scope for him to deliver the best spell. Having clearly indicated that the movie is about brother-sister bonding in its initial moments, we find the emotional essence missing. Malavika Mohanan to appears throughout the film, but her characterization lacks prominence. Aadukalam Naren is a special delight to watch, as he has utilized this opportunity to the best. Director Ameer’s appearance is a surprise, but his role lacks substantiality.

When it comes to screenwriting, the twists are appreciable, but the reason or motive behind the play looks unconvincing. A film based on investigative journalism could have been done with much greater magnitude, but this one looks fallible.

The musical score by GV Prakash is just okay as the songs don’t add any value to the screenplay. Cinematography and editing are pretty decent.

Overall, Maaran is an ordinary fare that lacks the emotional punch or engrossments in storytelling. Despite having great actors from the industry, Karthick Naren fails to deliver a power-packed spell.

Verdict: Neither Dhanush nor Karthick Naren shines in this movie.