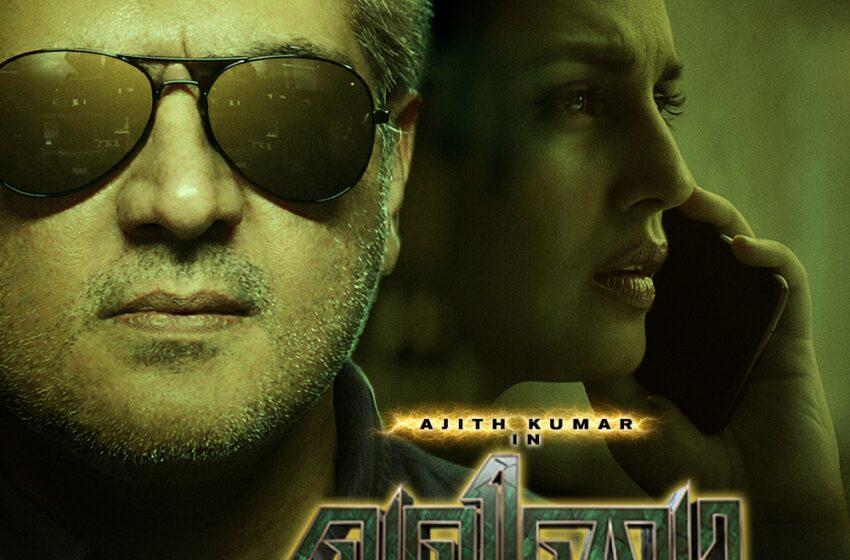 Valimai marks the second collaboration of actor Ajith Kumar and filmmaker Vinoth, who delivered a stupendous hit Nerkonda Paarvai Earlier. Besides, this is the second movie production for this duo by Boney Kapoor of Bayview Project LLP.

The story revolves around an honest police officer Arjun (Ajith Kumar), who takes over a serious prevailing case in Chennai involving multiple deaths, chain snatching, and many more illegal activities. He comes to know that the mastermind behind all this evil is the leader (Karthikeyan) of the Dark Web group called ‘Satan Slaves’. When he has caught him red-handed, it turns out to be a shocking moment for Arjun to see that his younger brother is held as the main culprit behind these illegal activities. Will Arjun prove his innocence and save the reputation of his family by redeeming the lost life of his brother forms the crux of this story. 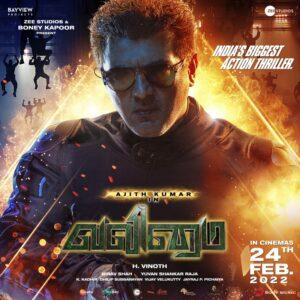 Filmmaker Vinoth is far-famed for making movies based on socially relevant themes, which have been illustrious with Theeran Adhigaaram Ondru, Sathuranga Vettai, and Pink remake in Tamil titled ‘Nerkonda Paarvai’. With Valimai, he delves into a serious issue, which is spread like a forest fire across the globe and has got its domain in the Indian sub-continent as well. He needs a special mention for this attempt. On the flip side, in all the erstwhile movies to Valimai, Vinoth had actors, who completely surrendered to the heart and soul of the characters, they played. They were content-driven heroes, and it gave ample space for Vinoth to execute his ideas. In contrast, Valimai has Ajith Kumar’s domination over Vinoth. Say, for instance, Vinoth is not a filmmaker, who is very good at handling commercial elements. He narrates the stories in a straightforward manner without including any unwanted stuff, but Valimai turns out to be a different scenario. It nearly takes 30 minutes for the story to kick-start the actual drama. Be it the hero introduction song, the emotional moments in the family involving the mother, sons, and others, they look slightly unnatural, and we fail to connect with them. We get to see that the unemployed youngsters are being misdirected into wrong deeds. On the parallel track, we find the younger brother of Ajith Kumar being cornered by everyone for his unemployment. This clearly indicates, how the story is going to proceed further, and our assumptions are exactly correct during the intermission, of what the makers supposedly called an ‘Interval Twist’. 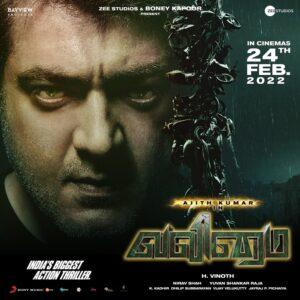 Okay! So who are the ones to be appreciated? Obviously, it’s the action department team that has worked magic on the screens. They will leave you amazed with the jaw-dropping bike stunts. If you’re looking out for the cherry-picks, then it would be the pre-interval sequence and the bus action block in the second half. The cinematography by Nirav Shah is outstanding. The songs by Yuvan Shankar Raja aren’t really appreciable. Nothing to blame him as the songs don’t have much scope in this movie…

On the whole, Valimai can be appreciated for the outstanding action blocks, the earnest attempt of Vinoth to showcase a serious social issue. However, the family elements remain a hampering factor. To be precise, a 2-hr version of Valimai would have got labeled as ‘The Best High-Octane Thriller that Tamil Cinema has ever seen.

Verdict: With a gripping first half, and slightly sluggish second hour, Valimai scores the best in action blocks.