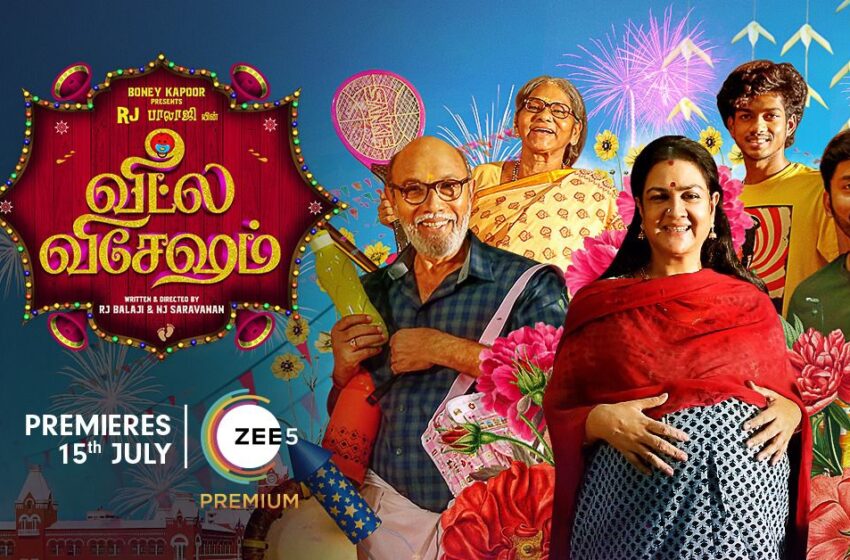 ZEE5 is all set to deliver an ultimate family entertainer by world premiering the recent box office entertainer ‘Veetla Vishesham’ from July 15, 2022 onwards. An official adaptation of the successful Hindi flick – Badhaai Ho, the movie features RJ Balaji as the lead character, who has directed it alongside NJ Saravanan. It also features Sathyaraj, Urvashi, and Aparna Balamurali as the titular characters.

The movie revolves around the hilarious incidents that break open when a middle-aged couple announce the pregnancy, which leaves their grown-up sons embarrassed. How the family comes to good terms during this phase is narrated with a plethora of humour and heart-touching emotions by emphasizing the beauty of family bonding and relationships.

While the audiences celebrated ‘Veetla Vishesham’, together with families and friends at the theatres, ZEE5 is glad to announce the commencement of the family carnival at home with its world premiere. With the season flooded with raw, intense, and complex tales, it’s a perfect laughter-riot, tailor-made for the universal crowds to indulge with lots of LOL moments. Besides, ZEE5 believes that Veetla Vishesham, acclaimed by critics and general audiences as a groovy entertainer, shouldn’t get missed for its unlimited entertainment and feel-good emotions. Also, for the ones who couldn’t make it to the theatres, ZEE5 gifts this valuable family entertainer, which they can sprawl out on the couches and enjoy at home. Family entertainers always instill the urge among audiences for repeat viewings, and ZEE5 has this stress-buster flick that everyone can watch again and again together with family and friends.

Commenting on the release, Manish Kalra, Chief BusinessOfficer, ZEE5 India says, “Tamil is an important market for us at ZEE5 and ourfocus has always been on bringing good content to our viewers. We have beenconsistent in expanding our presence in the Tamil markets and are excited torelease yet another movie – Veetla Vishesham on ZEE5. The movie is an officialadaptation of the successful Hindi film – Badhaai Ho; we are confident that theaudience will enjoy it as much as they enjoyed Badhaai Ho. We hope to continuedelivering extraordinary entertainment to ZEE5 audience around the world.”

ZEE5 has become the leading streaming entertainment service in the Indian sub-continent, for presenting original series & movies and critically acclaimed and commercially blockbuster movies consistently to the audiences.