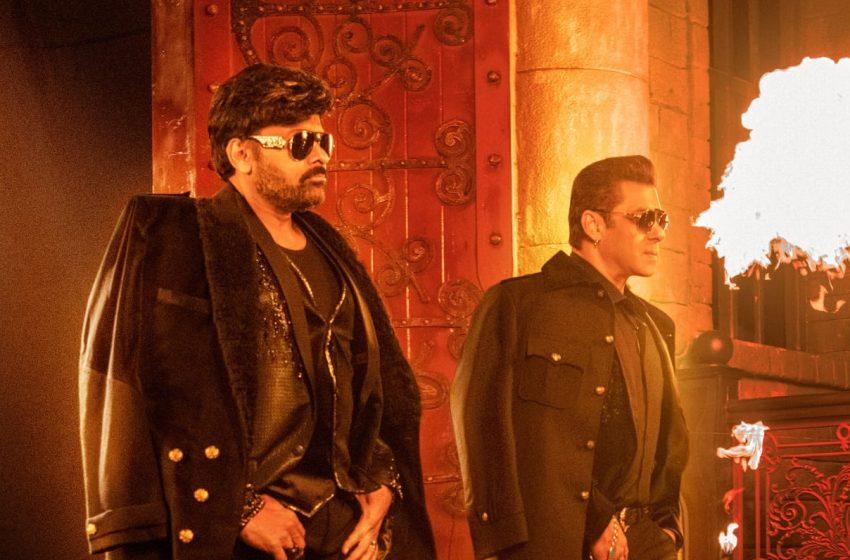 The promo of Thaar Maar song featuring two megastars Chiranjeevi and Salman Khan has set great expectations on the dance number which was launched just a while ago in Telugu and Hindi languages. What makes the song an extra special one for the fans is that it sees the two megastars setting the dance floor on fire with their peerless style. The song indeed glorifies the stardom of Salman Khan and Chiranjeevi and is a treat to watch.

Witness mega mass feast, as Chiranjeevi and Salman Khan can be seen doing a massy hook step with background dancers grooving in sync with them. The track with funky beats was composed S Thaman and will surely become an earworm. Choreographed by Prabhu Deva, the video shows Chiranjeevi making stylish entry with his hand on his face, whereas Salman enters while biting his nails. The two stars are seen wearing the same black outfit and donning black shades.

Shreya Ghoshal added extra zing to this catchy foot-tapping number with her vocals, whereas Anantha Sriram has penned the lyrics. The video also shows making visuals where Chiranjeevi, Salman Khan, Prabhu Deva and the team are seen having fun time shooting for the song.

GodFather is the biggest action entertainer of all time. The most awaited movie is directed by Mohan Raja. Nayanthara, Satya Dev, Sunil and Samuthirakani are the prominent cast.

RB Choudary and NV Prasad are mounting the movie grandly under Konidela Productions and Super Good Films banners, while Konidela Surekha presents it. Nirav Shah has cranked the camera, while Suresh Selvarajan is the art director.

GodFather is scheduled for a grand release in Telugu and Hindi during Dasara, 2022 on October 5th.